The curators for the annual show presenting Turkish contemporary artists in Istanbul, Derya Yücel from Turkey and Simona Vidmar from Slovenia, were chosen on hand of our past work as curators and our international experiences, to conduct a horizontal selection among art projects proposed for an open call, without age limits, without specific topic or preferred media. What this open call by Association for Painting and Sculpture is looking for are new works, new productions by creative professionals and all it is offering is a platform for presenting new and fresh in Turkish contemporary visual culture. That was the challenge enough to start with exciting work in tandem.

What was to happen was ontological to the process of creation of this show – the overview presentation of art works, which reflects dense and sometimes challenging interconnection of creative processes, confrontation of different media and objects, parallel existence of individual with universal, private with public etc. like any other exhibition would. We know that “museums/galleries have been transformed into record rooms.” (Nicolas Bourriaud), however this record rooms document the work that artists do, not merely art works, but the whole creative process that is the actual work of art. And it was the process that intrigued us most.
The creative power possessed by the artists arises from the world that they live in, from the organisational structures of the outside reality. We can't really define the today's reality, we mostly feel this, we feel the alienation and abstraction of the relations, we see the images every day, that are separated from our daily life and we feel our everyday life excluded from the reality.

But this overwhelming condition breeds fruitful critique of its own image. And this is where we are expecting art to act, in a fight against standardisation of forms, applications and performances. Production models of contemporary art practices can provide people with intuitive comprehension of reality, to see its concrete side. What we were looking for at our process of selection were how original was the artists’ perception of this world. And are there any limits to it? The answer was provided by one of the artists at the 2008 exhibition in Akbank Sanat, “I have to fight with my own frontiers, that's the biggest fight to solve!” (Viron Vert, 27th CAIE).

28th CAIE brings together over 30 art works by 20 artists in dynamic visual confrontation, sometimes as a fruitful coexistence other times as a sharp contrast.

One of the prevailing motifs, which came up with selection and vaguely connects almost half of the authors presented, is eternal motif of portray/self-portrait, depicted with moving images, used as a symbol, converted in posture, humorous or dim. Reysi Kamhi, young artist from Istanbul, presents in two tiny notebooks sketches depicting her friends as found on Facebook albums. We deal with inverted situation - once digital, becomes tactical again. Both images on Internet and in the artist’s book are mere impressions, but once exiting the socio-political word of the media, they come back to the artist as portraits of her reality. Established young artists from Istanbul, Burcu Yağcıoğlu, produced slow and silence video, where she uses her face and her hair to undergo the transformation from a beautiful young individual to “headscarf wearing” suppressed female, which reflects the geo-political labelling of the artists and expected “exoticisms” of contemporary art market. Güven Bozkurt with his series of video portrays in black and white is actually producing life-photography, still images, where only rising cigarette smoke and grill-damp are reporting of movement and time. Another slow motion image, this time in highly esthetical, artificial impression is computer animation by Yağız Özgen, in which we follow secret transformation of an isolated young male from good to evil. Two other short video works by two young artists, Fırat Bingol and Tuncay Murat Atal, also use self-portrays to tell stories, both extremely simple, absurd and relaxingly humorous. In first one we follow comical allegory to the police interrogation methods, the second one depict old-fashioned artist in archetypical existential distress. The last artist that we can feature in this “group” is Songül Sönmez with her “back-portraits” composed of 29 individual paintings, forming a rectangle with a missing part. Not really showing faces and not really presenting anything in particular, she manages to express the urge for questioning the obvious. The only photographic work at the exhibition, the serial of black and white photographies by Murat Sezer, is using the medium for its primal function, as a tool for documenting existence. The beauty of decay and stories of the past are exposed as mere documents or research material.

Other artists exploring the media, this time in experimental and less “appropriate” manner are young artist Fırat Neziroğlu with his kilim, hand-woven rug, depicting a very profane view of a peeing boy in life-size portrait, the other one is established artist Ardan Özmenoğlu, which chooses toothpicks to form a beautifully wavy carpet. Both materials woven rug and toothpicks stand for tradition and roughness, once transported into new context - one obscured, the other one refined - they play with the multiple layers of meanings and projections.

We can connect another “group” of artist on the show, which seems to be following people and spaces that define them. Emre Meydan, young artist from İzmir presents series of large scale paintings, depicting several small artists studios, rather similar in form and character. They are evacuated of people, just to appear more sincere and somehow unbearable passive. A void space is presented in a painting by Seyit Mehmet Buçukoğlu, where hardly recognisable interior is blinded by the colour red. It stands there as a warning and a question mark. And if mixed media images by Hüseyin Rüstemoğlu remind us of long forgotten places and memories, then legs up the wall in a girly room by Bahar Oganer is nothing but happy living within stripes, dots and patterns. However memory although hard and painful is whiteness of our existence, as opposed to mere being in undefined world. Öner Özlü is using kaleidoscope-like moving images to follow the patterns of mass-movement of people in mass-consuming spaces. And finally young artist Fulden Aran takes us to another “virtual” world, where enclosed society meets in leisure. Her series of golf players looks like harmless insight into the parallel existing of the self-sufficient.

We should finish this list of art works by 4 remaining one, which can be summarised as “gags”, very different in form, medium and context, however all of them using elementary humour language to put out the massage of their purpose. Yaşam Şaşmazer, artists of middle generation, puts on show a sculpture of a laughing man, shrink to a height of a young boy and shamelessly pointing his finger (at the source of his mockery) to make space for distancing oneself from the context in which we operate. Miniature installation by İrem Tok is strait forward and simple: a noble man crossing the abyss between two banks/nations on a acrobat-like rope, an almost impossible task, but in it’s appearance there is a sign of easiness and content. Three short videos by Mehmet Öğüt, Black Cube, present short performances, sketches, in which authority of any kind (state, tradition, art market) is questioned in a seemingly simple way that bears witness of subversion. The least but not last is the music video-like short computer animation by German born artists Ali İbrahim Öcal, where dancing Turkish flag to a popular tune seams intriguing seductive. As to be saying “I have to fight my own frontiers”. 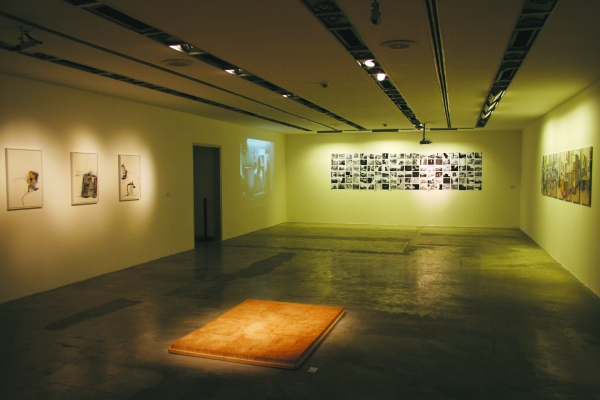 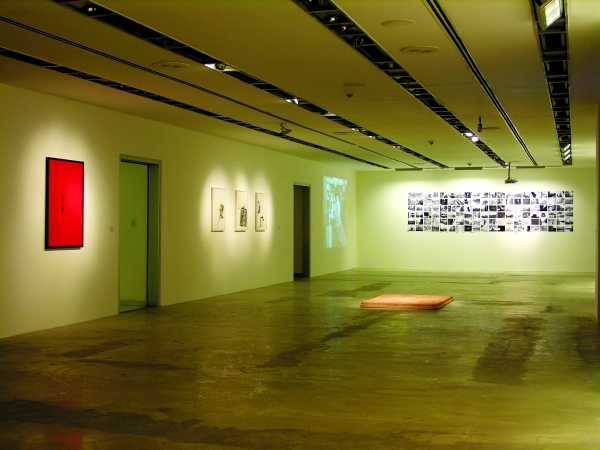 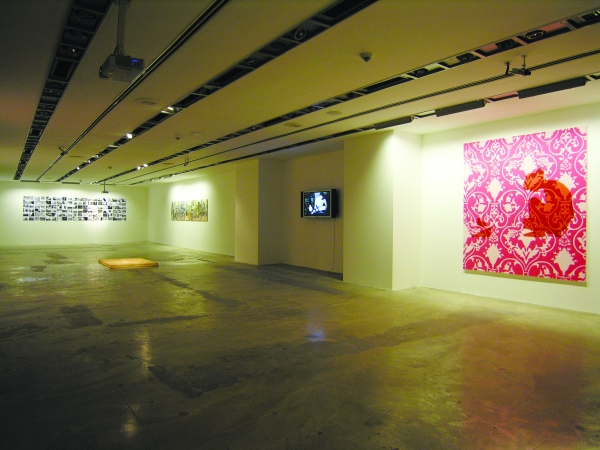 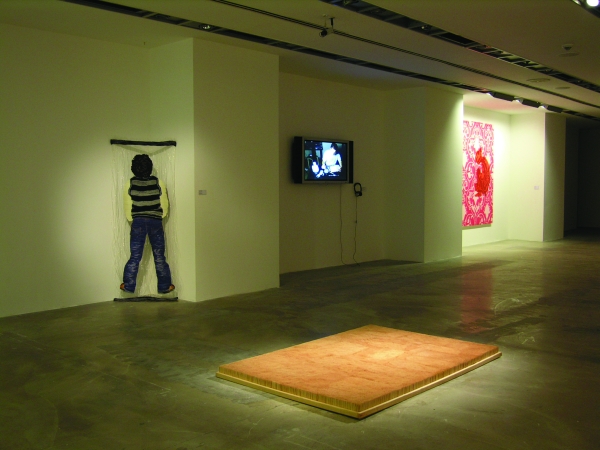 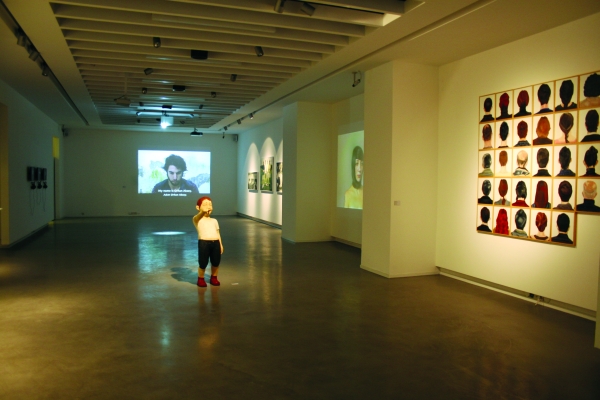 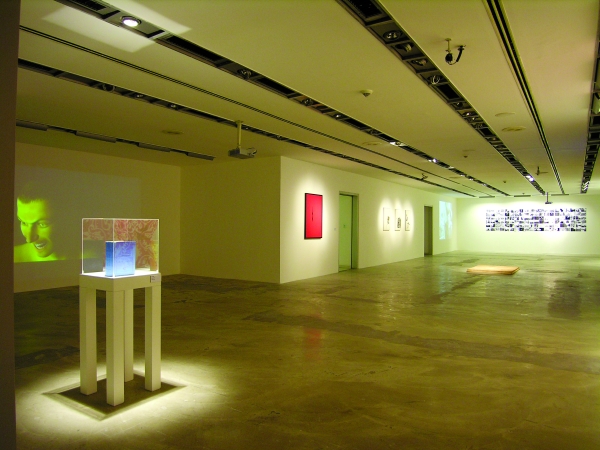 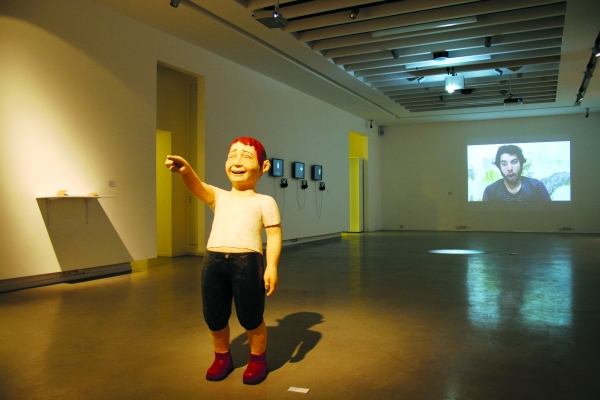 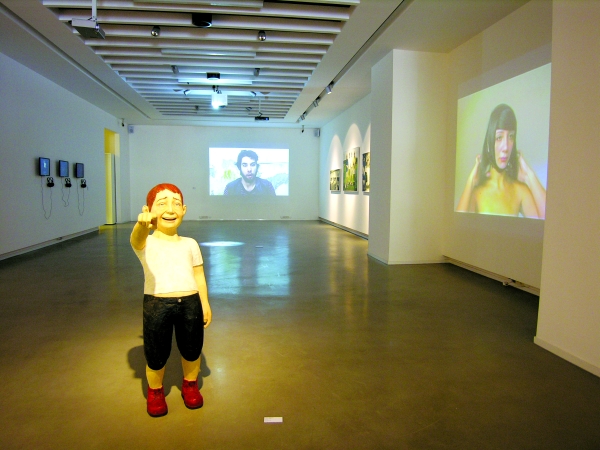 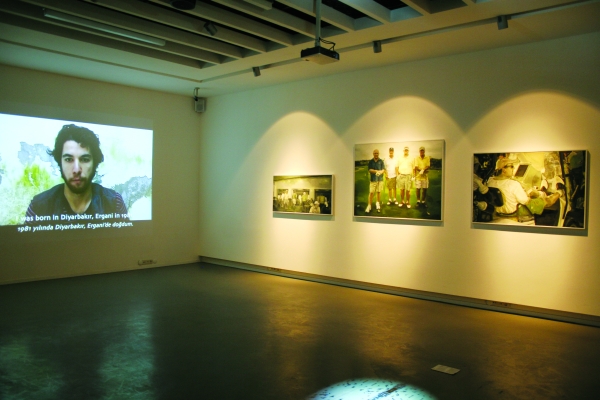