Creative practices have mostly been an interpretation of the “reality”, redoing it and a study of vague structures of human imagination through the course of history. The world has revealed itself to us in the light of such constructs which the artists have reflected upon a surface. Although the traditional art practices are the designs of reality, today, the setups that the new digital technologies offers have transformed the artwork itself into a simulation of reality. Digital media have widened not only the daily life experience but also our horizon of arts, culture and the social. However, losing our perceptual attachment with “reality” between such an intense data flow and information chaos has become a high price we pay. Today, technological (r)evolution offers new tools for a common exploration of individual and societal realities and the strategies that new media apply to those tools hint at the art perception of the future. But, can art still be a representation or substitute of the reality/truth? Can't we talk about a reality experience that cannot be fixed to a solid form even when the interpretation of reality is objectified by works of art? How do the semantics of information, image and representation in today's digital culture environment change art?

The event, titled Formless: Fluid Reality in New Media Art aims at listing such questions and exploring -if not answers- the suggestions that the new media art offers to these questions. Taking its title from the notion of “L’informe/formless” theorized by Georges Bataille, the exhibition focuses on the changing positions of variable boundaries within new media art through the works of artists from Serbia and Turkey. In this context, the concept of “Formless” comes out as a meaningful metaphor that could describe both today's world and its art. In Bataille's works, this concept, appears not as an adjective that negates things or underlines the lack of forms but a destructive dichotomy between the form and the content. Everything had already their own forms anyway. Worms, spiders, spittle and even the universe could be liberating metaphors with their variable formlessness. Bataille had seen the formless as a new way of distorting each and every category. And we believe we could have countless ways to read new media art works through the notion of “formless”. And it is only through those ways that we observe and watch how our perception of reality -already distorted in the tumult and disorder of today's world, disfigured, lost its directions, transformed into a fluid experience- are converted into a new media art form by the artists. As in the idea of the “formless”, we see the new media art allows ever-changing, fluid and unfixable forms to gain space in terms of their time/space/form/content contexts. The close relationship that new media arts hold with daily phenomena, proves us the very fact that analysing such productions of art from a cultural perspective is inevitable. Within productions of artworks which are dominated by digital technologies as their tools and/or environments, the attention is more on the experience/perception rather than the form/representation and even as Bataille had proposed long ago, art manifests itself as a reflex for “overstepping the boundaries”.

The limits of traditional categories in art, have gained a different aspect with the use of technology. Contemporary art which cannot be limited by solid categories such s the identity of the artist, the role of the audience, the reality of the artwork, disciplines and form/content has evolved into changing, collective, collaboration-oriented, transparent and flexible standards.

In early 20th century, Modern Art redefined all the references previously made to the identity of the artist, artistic reality and its representation. Art adopted a new reality by abstracting the representation of the realm of objects and/or replacing itself with the object. And the artists, agents of redefinition of the object of art, declared that the creative act was not realized by the artists alone but the audience contributed to the act by deciphering the internal dynamics of the artwork and interpreting them. Action and the participation of the audience played a significant role in Kinetic art, Op-Art, Fluxus, Happening, Performance and New Realism, respectively. The role of the audience was, in fact, evolved gradually: passive, actor, active and co-creative participant. New media art, on the other hand, has placed the interaction between the audience and the artwork within the mutual effect. The audience has now turned into users who take an active part in the formation, design, content and behaviour of the artwork in the same way how consumers turned into producers. Through this approach, the individual who receives has become an indispensable part of the creative act and both the impact and the space of the audience have widened. While the behavioural patterns of the artist and the audience have become variable, the boundaries among the artist-artwork-audience have taken up a fluid form.

Digital technologies have also presented new methods and paradigms that open up the artwork's spatial identity to the artist. Such means not only expanded the range between the artwork/image but also the sphere of interaction between the audience and the artwork. The perceptual and sensorial coordinates of the real world began a journey towards the infinity of virtual space. The transivity within new media not only diversified the ways of artistic narration but also the tools of production so that a data form that stands as a mere group of ones and zeroes now can take countless shapes from a virtual object, created by modelling and animation programming to -as an animation- a moving image, and -as a sculpture/painting- a physical object. Animation and/or image can exist by being distributed on the Internet -as an online art-. Today, new media art is more enthusiastic about blurring the boundaries between traditional categories rather than analysing them. The strategies adopted by the artists operate on manipulating the unexpected nature of the “reality” and questioning the autonomous role of the art. The artists are embracing a discourse that progress through practices such as the production of flexible forms, inclusion to the fast data flow, openness to instant information, reflexive organisation and participation. The study of the reality in the digital world in an artistic way is a strategy for questioning the boundaries encapsulated by the “fluid reality”, boundaries, traps and possibilities. New art, therefore, can be defined as a media ecology.

A Brief Guide for the Exhibition

Ansen transforms daily objects through combining the principles of sculpture, painting, photography and cinema in his mono-C print work titled “Cusei/Biat”, which he produced making use of digital tools. This composition that he sets up is based on the concepts of war, justice and crime and the principles of literature, religion and history. Barış Mengütay’s digital animation named “Our Land”, which turns an elegic self-criticism into an ironic form, also takes its place in the exhibition as a digital image. In his transmedia project “Alibi (Black or White)”, originally presented in the form of video and the medium of photography, Dejan Grba uses a video clip of Michael Jackson. This visual-kinesthetic-audio recording represents the potentials of creative methodology that relate to consideration of the morphology of face and through this also to aesthetic implications of portrait, interpretation of identity, manifestation and the virtual nature of reality. In his digital animation titled “Michelangelo”, Dorijan Kolund&2;ija “activated” the mural painting of Michelangelo’s  “The Last Judgment”; in the continuum of movement and process a surrounding is generated for the viewer between realistic and fictional space. The joint work of Elif Öner and Vincent Rozenberg, www.historicalfuturemuseum.org, is viewed as a net-art project. The artists upload and share a daily image on social media. While this project that encompasses a year is viewed as a personal diary at first sight, it also suggests a reading on the archive relations between art practice, daily life and history. Gizem Karakaş gets inspiration from the experience of new media in her short film ‘Fuat Eşrefoğlu Eating a Lahmacun’. She reproduces the 1982 film ‘Andy Warhol Eating A Hamburger’ by Jørgen Leth, who believes in sincerity more than genuineness in art, with local elements. Nemanja Ladic, with his video work titled “Papierschnitzel” points to a possible visual content caught in the details of travelling, where sceneries follow each other as the viewer is in constant movement. Similar to a moving stage design, this video introduces the notion of time and through this also the relationship of watching versus seeing, and above all it seems that the artist intentionally combined representations in order to slip them one under another and to emphasize the superficiality in the very combining of the images.

Ozan Türkkan, who makes use of new digital tools, algorithms and productional linguistic programming languages in his media works, takes part in the exhibition with his kaleidoscopic generative video installation named “The Hole”. The artist bears a hole between us and the fractal dimensions of quantum universe. The spectators meet a macro universe when they look through a hole born in a metal, polygonal mass. Stevan Kojic, in his years-long work that implies transmedia spatial installation titled “Self-Sustaining Systems of Absurdity” (the exhibition shows only the documentation of the works and previous exhibitions) strives to discover the relation between the individual, society, technology and nature. Using electronic waste, the artist seeks an alternative bio-social potential and explores borderline questions of the relationship between the living organism and the machine system. Yağız Özgen, producing on the reciprocal relation and tension between digital and traditional methods, simulates the nature of digital language in traditional ways of artistic production in his works. He builds the simple principles of painting on the discontinuous nature of digital language in “Untitled”, where the detail of a lighting device which is wrapped up in an abstract form is viewed. The interactive installation titled “The Photograph of Time”, developed and designed by DECOL art collective of which Yetkin Yılmaz and Ahmet Said Kaplan works together, aims to blend the notions of space-time. While a discussion environment on space-time is created by means of applying slit-scan technique live, the spectators, whose own image is reflected on the screen as now and then, have their perception of reality manipulated. Embracing a language which transforms reality with her collages, Zorica Colic participates in the exhibition with two separate works. The collage of the artist titled “AnOther World of Interiors”, where she comments on the relation between symmetrical and asymmetrical social / cultural identities in the “contemporary Europe”, visualizes the margins of mega and meta discourses relating identity. The other work of the artist in the exhibition “Face Shifting” presents a research on the notions of identity, body, advertising, media and technology. The artist is interested in the imposition of collective roles, the internalization of taste-consumption culture and the melt-down of the boundaries between the natural and the artificial. 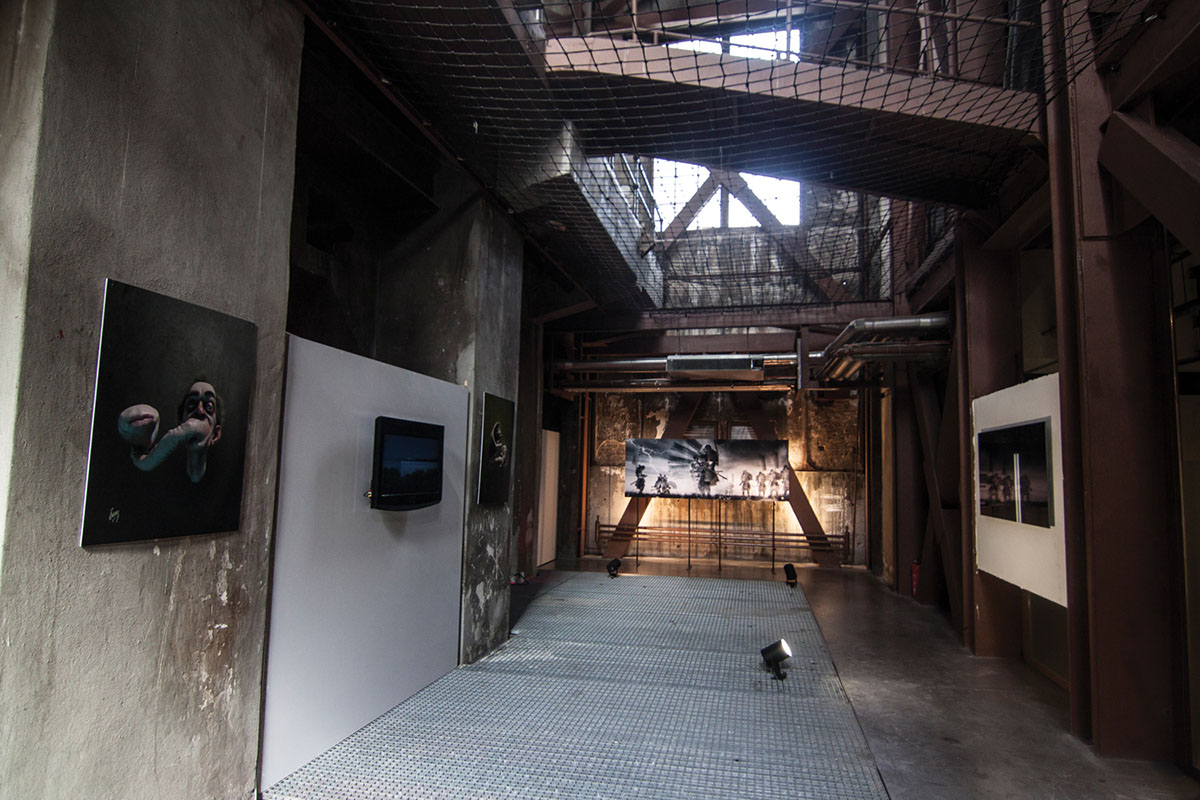 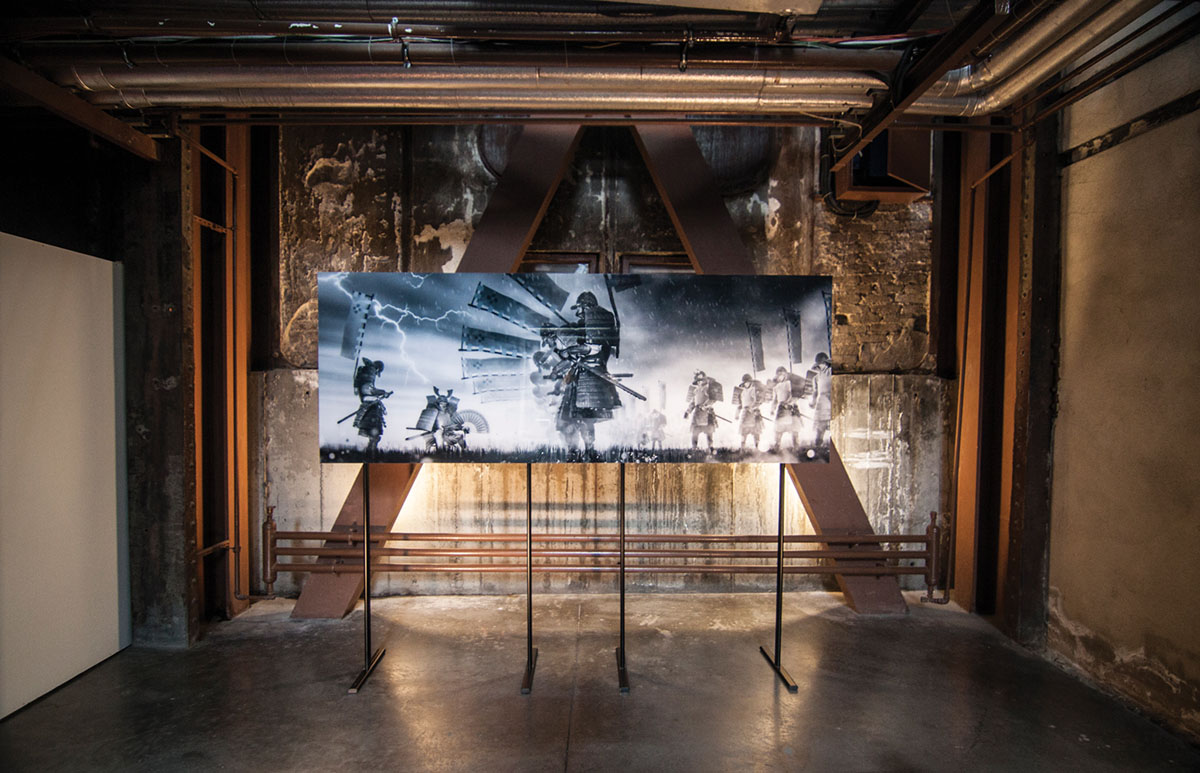 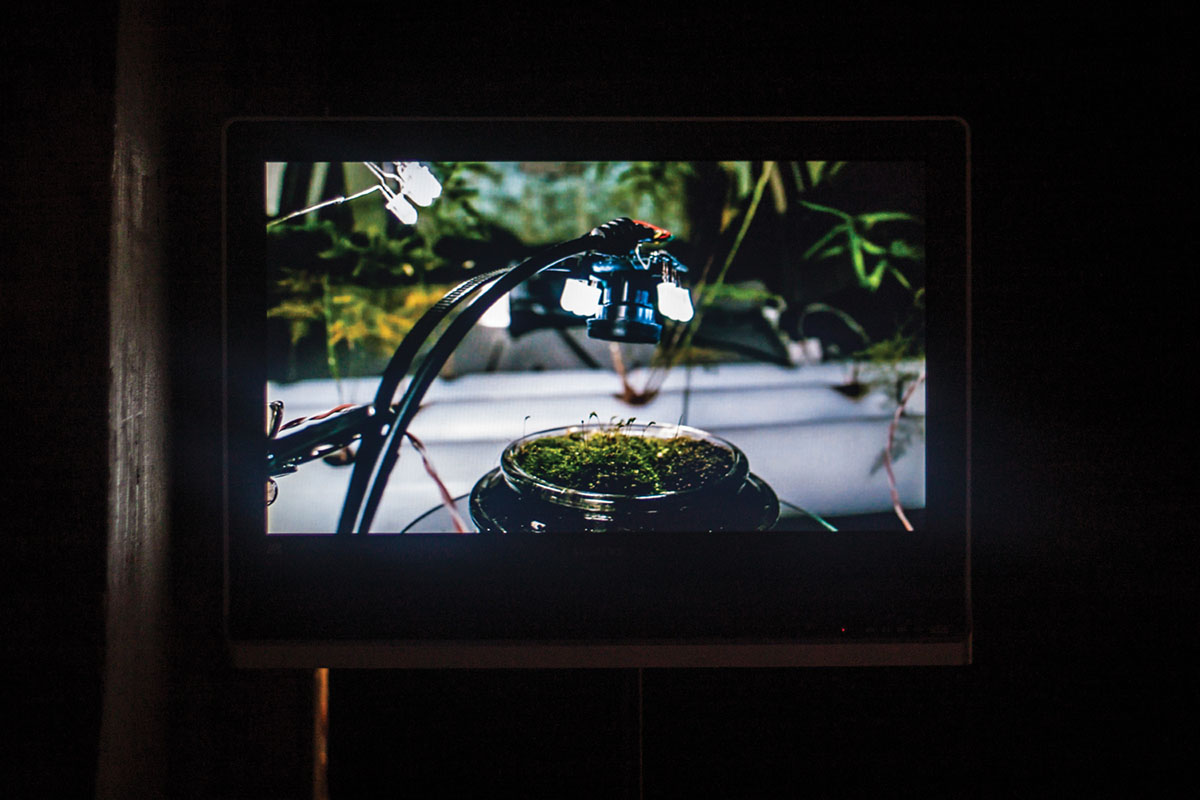 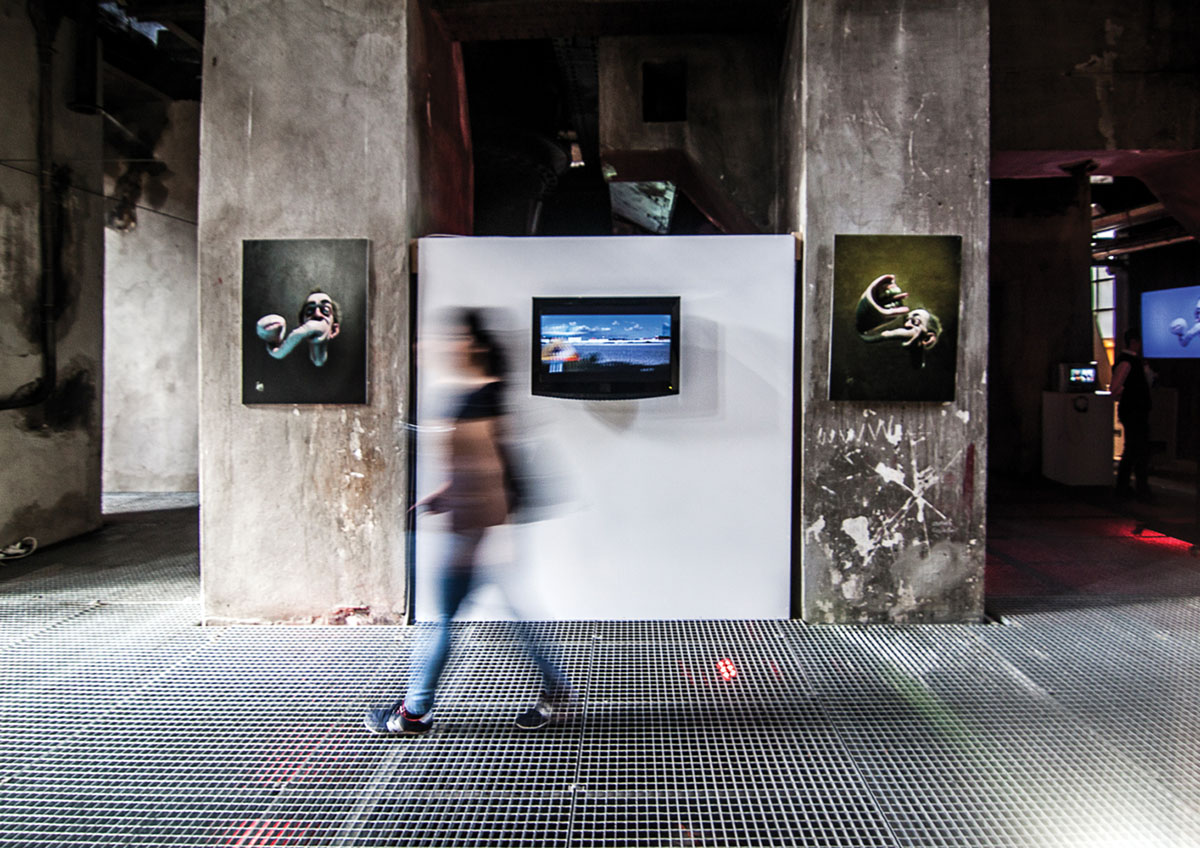 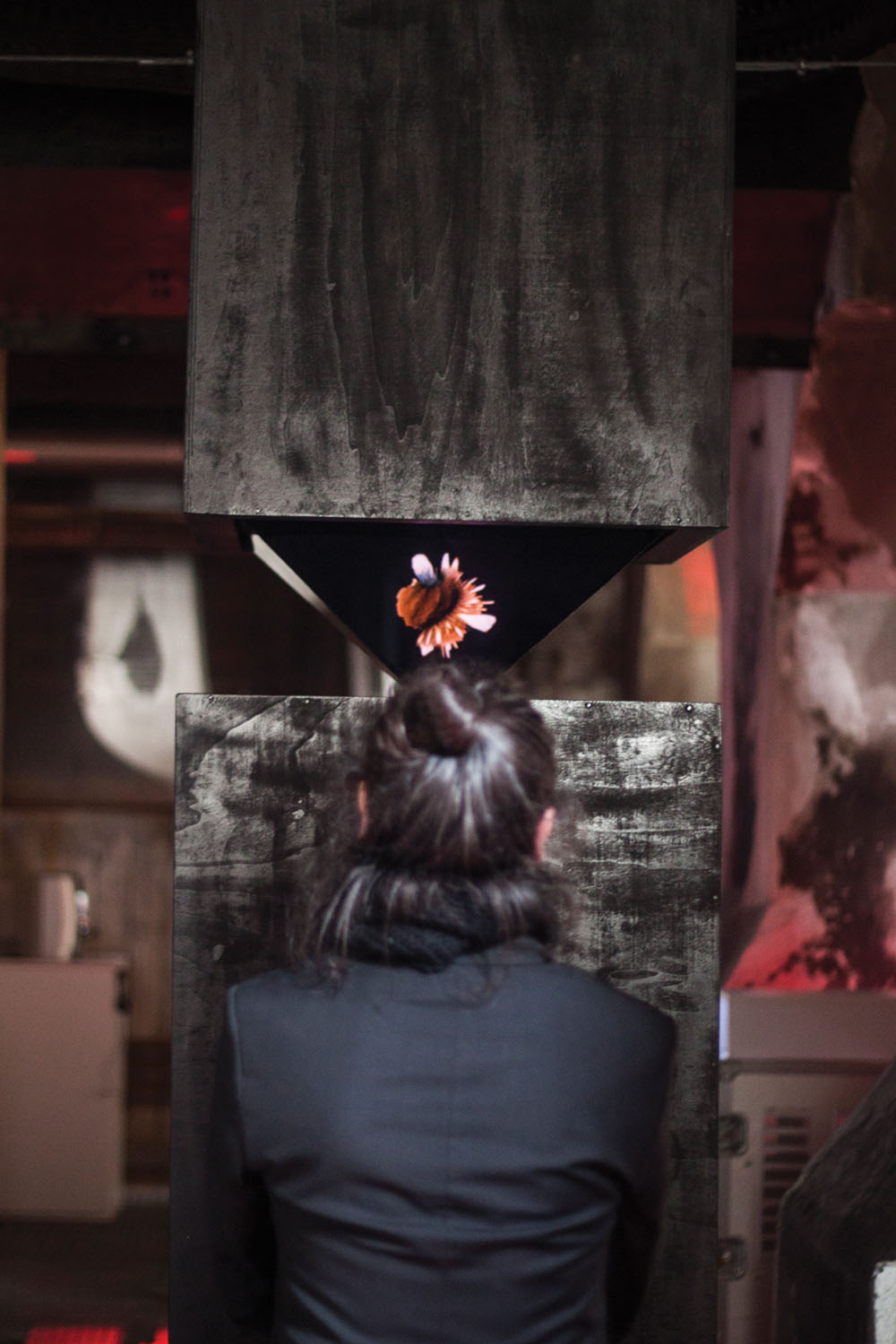 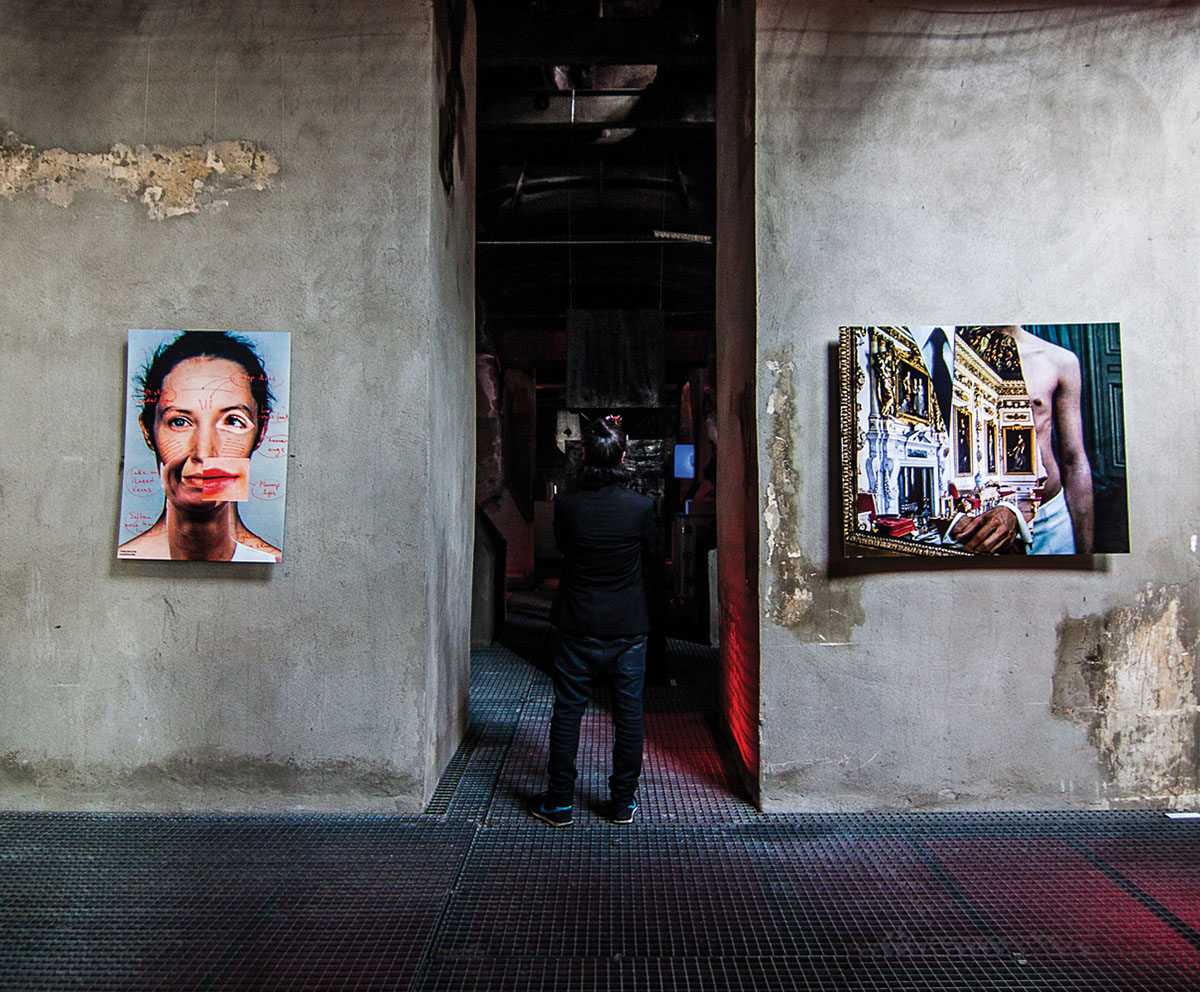