Creative practices have mostly been an interpretation of the “reality”, redoing it and a study of vague structures of human imagination through the course of history. The world has revealed itself to us in the light of such constructs which the artists have reflected upon a surface. Although the traditional art practices are the designs of reality, today, the setups that the new digital technologies offers have transformed the artwork itself into a simulation of reality. Digital media have widened not only the daily life experience but also our horizon of arts, culture and the social. However, losing our perceptual attachment with “reality” between such an intense data flow and information chaos has become a high price we pay. Today, technological (r)evolution offers new tools for a common exploration of individual and societal realities and the strategies that new media apply to those tools hint at the art perception of the future. But, can art still be a representation or substitute of the reality/truth? Can't we talk about a reality experience that cannot be fixed to a solid form even when the interpretation of reality is objectified by works of art? How do the semantics of information, image and representation in today's digital culture environment change art?

The event, titled Formless: Fluid Reality in New Media Art aims at listing such questions and exploring -if not answers- the suggestions that the new media art offers to these questions. Taking its title from the notion of “L’informe/formless” theorized by Georges Bataille, the exhibition focuses on the changing positions of variable boundaries within new media art through the works of artists from Serbia and Turkey. In this context, the concept of “Formless” comes out as a meaningful metaphor that could describe both today's world and its art. In Bataille's works, this concept, appears not as an adjective that negates things or underlines the lack of forms but a destructive dichotomy between the form and the content. Everything had already their own forms anyway. Worms, spiders, spittle and even the universe could be liberating metaphors with their variable formlessness. Bataille had seen the formless as a new way of distorting each and every category. And we believe we could have countless ways to read new media art works through the notion of “formless”. And it is only through those ways that we observe and watch how our perception of reality -already distorted in the tumult and disorder of today's world, disfigured, lost its directions, transformed into a fluid experience- are converted into a new media art form by the artists. As in the idea of the “formless”, we see the new media art allows ever-changing, fluid and unfixable forms to gain space in terms of their time/space/form/content contexts. The close relationship that new media arts hold with daily phenomena, proves us the very fact that analysing such productions of art from a cultural perspective is inevitable. Within productions of artworks which are dominated by digital technologies as their tools and/or environments, the attention is more on the experience/perception rather than the form/representation and even as Bataille had proposed long ago, art manifests itself as a reflex for “overstepping the boundaries”.

The limits of traditional categories in art, have gained a different aspect with the use of technology. Contemporary art which cannot be limited by solid categories such s the identity of the artist, the role of the audience, the reality of the artwork, disciplines and form/content has evolved into changing, collective, collaboration-oriented, transparent and flexible standards.

In early 20th century, Modern Art redefined all the references previously made to the identity of the artist, artistic reality and its representation. Art adopted a new reality by abstracting the representation of the realm of objects and/or replacing itself with the object. And the artists, agents of redefinition of the object of art, declared that the creative act was not realized by the artists alone but the audience contributed to the act by deciphering the internal dynamics of the artwork and interpreting them. Action and the participation of the audience played a significant role in Kinetic art, Op-Art, Fluxus, Happening, Performance and New Realism, respectively. The role of the audience was, in fact, evolved gradually: passive, actor, active and co-creative participant. New media art, on the other hand, has placed the interaction between the audience and the artwork within the mutual effect. The audience has now turned into users who take an active part in the formation, design, content and behaviour of the artwork in the same way how consumers turned into producers. Through this approach, the individual who receives has become an indispensable part of the creative act and both the impact and the space of the audience have widened. While the behavioural patterns of the artist and the audience have become variable, the boundaries among the artist-artwork-audience have taken up a fluid form.

Digital technologies have also presented new methods and paradigms that open up the artwork's spatial identity to the artist. Such means not only expanded the range between the artwork/image but also the sphere of interaction between the audience and the artwork. The perceptual and sensorial coordinates of the real world began a journey towards the infinity of virtual space. The transivity within new media not only diversified the ways of artistic narration but also the tools of production so that a data form that stands as a mere group of ones and zeroes now can take countless shapes from a virtual object, created by modelling and animation programming to -as an animation- a moving image, and -as a sculpture/painting- a physical object. Animation and/or image can exist by being distributed on the Internet -as an online art-. Today, new media art is more enthusiastic about blurring the boundaries between traditional categories rather than analysing them. The strategies adopted by the artists operate on manipulating the unexpected nature of the “reality” and questioning the autonomous role of the art. The artists are embracing a discourse that progress through practices such as the production of flexible forms, inclusion to the fast data flow, openness to instant information, reflexive organisation and participation. The study of the reality in the digital world in an artistic way is a strategy for questioning the boundaries encapsulated by the “fluid reality”, boundaries, traps and possibilities. New art, therefore, can be defined as a media ecology.

A Brief Guide for the Exhibition

The work of artists Elif Öner and Vincent Rozenberg, who act under the common name BENTO, is seen as a net-art project. The work Pixel Remapping_www.pixelremapping.museummodern.org represents an interactive work that strives to point out to the users how an “ordinary” image becomes a part of a larger internet archive of digital images, and also how visual language changes with alteration of the image, upon being put online. Pixel Remapping aims to encourage deliberation on contributions and limits of artistic production today, how it changes too with changes in technology, that is, how it brings about a change in the visual language. Dejan Grba, artist that has been researching digital media for a long number of years, lecturer at the department of Transmedia Research and Digital Art at the Faculty of Fine Arts, presented last year in Istanbul at the exhibition with the same title his long-standing transmedia project called Alibi (Black or White), originally presented in the form of video and photograph, in which he uses the video of Michael Jackson. On this occasion he continues his research in the work Anticipations. By simplifying formal values through video work and photographs we are going towards harmonization of formal values like lighting, coloring and position in three videos derived from a blue-screen sequence of Michal Jackson’s video Black or White. Statistically based visual transformations refer to early experiments with composite photography, pioneer works with analogue and digital morphing, generative and infographic visualizations of contemporary artists. Stevan Kojic presents himself with a segment of the work entitled Self-Sustaining System of Absurd, which implies transmedia spatial installations where it strives to reveal the connection between individuals, society, technology and nature. Using electronic waste, the artist searches for alternative bio-social potential, borderline questions of the relationship between the living organism and the machine system. Yağız Özgen presents himself with two digital prints, Untitled and Point of View. Creating on the foundation of reciprocal relationship and tension between digital and traditional methods, in his works he simulates the nature of digital language in traditional ways of producing art. Karolina Mudrinski, obtained her master’s degree in digital art at interdisciplinary studies at the Faculty of Art in Belgrade. The holographic installation entitled Final Fields is based on the idea of a need for using mathematical theories as basic modules in visual art. Translation of infinite space into finite one, with all its fixed qualifiers in an era of instability seems like a new utopia. Selçuk Artut, mathematician, artists, and lecturer on digital media, presents a wall kinetic project. The four-piece work Analogue Pixels – Series 5, in combination with the element of sound and programmed movements of small cogwheels on stainless steel plate, expands the borders of the observer’s perception. In this work, the artist strives towards interaction, between the form of the objects and the data. Ozan Türkkan, in his audiovisual installation F – Strings, comprised of three large projections on one wall, uses new digital tools, algorithms and programming languages. The elements of image create a strong connection between the designed abstract shapes, manipulated through geometrical mutations. The deconstructed fractal shapes are developed within the program matrix of the Rutt/Etra synthesizer, which creates tension and peculiar balance between classical sensibility and futuristic vision in the same image. Berkay Tuncay, through his two works on monitors, Perfect and Study for Webcam Girls, points to his observations on the online culture. In general in his works, he is mapping, designing and realizing a number of objects from material compiled from the internet. For this work, he assembled screenshots of girls on webcams exactly at the moment when they are touching the keyboard. Both presented works comment on both the commercial and non-commercial distribution of pornography on the internet, and on intimacy in the public sphere, actions from everyday life and absurdity, by which the network transforms into physical world. Artist Buşra Tunç exhibits a massive audiovisual installation entitled Opto-Glaz. The installation implies a real spatial performance between the virtual and the real. Especially designed sound and picture for this installation, are confronted in the space with glass balls hanging from the ceiling. The light refracts from the glass, making an exceptional visual experience in the room. 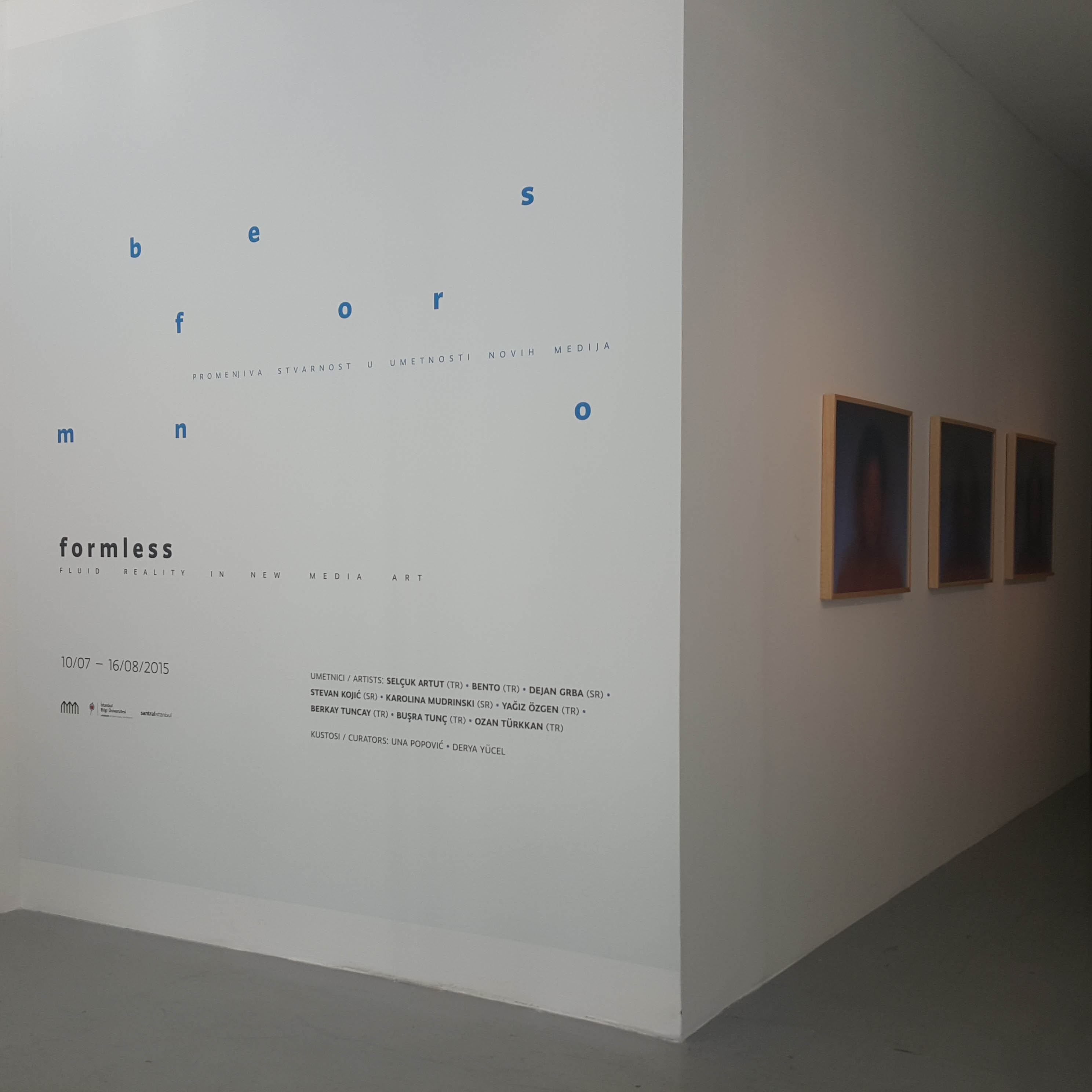 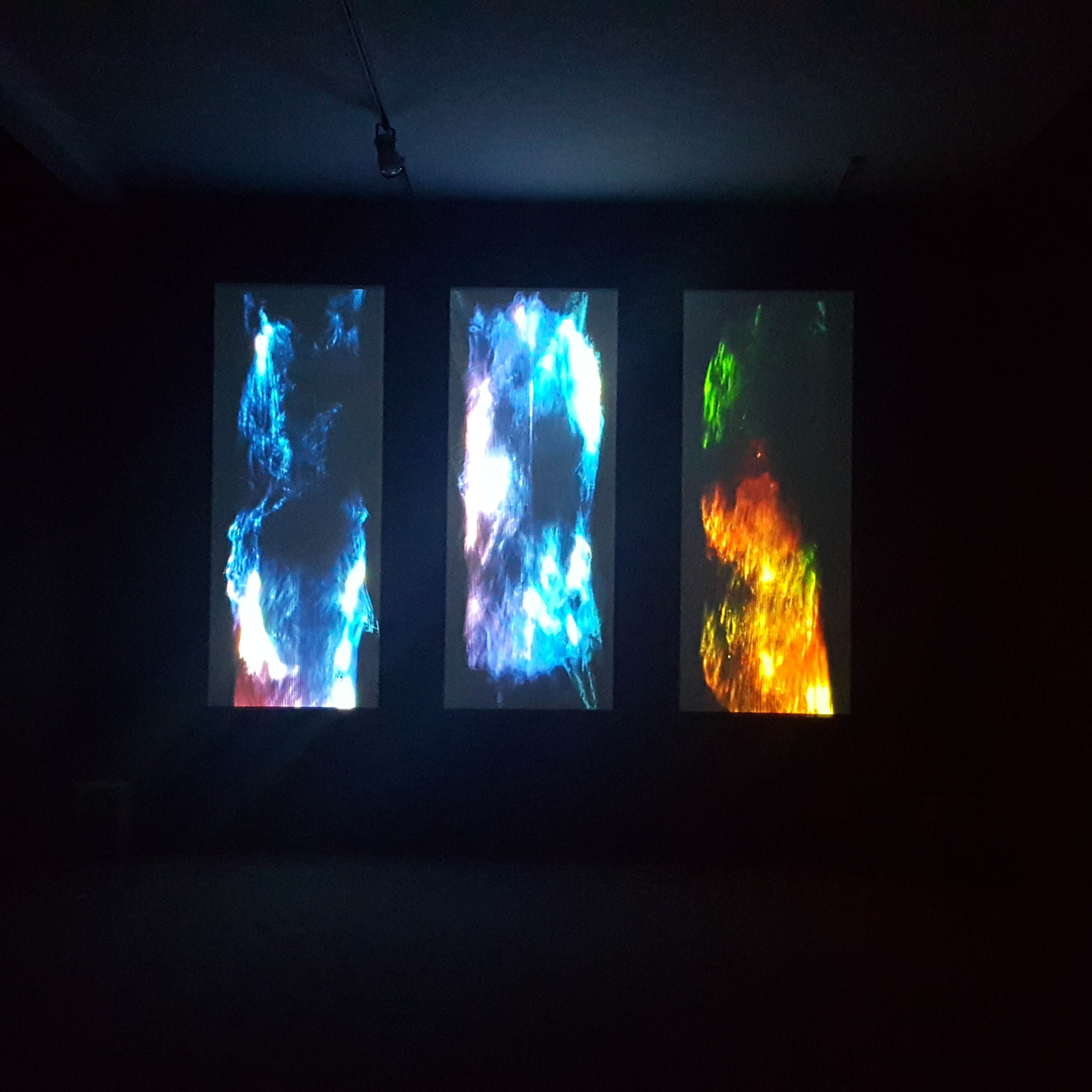 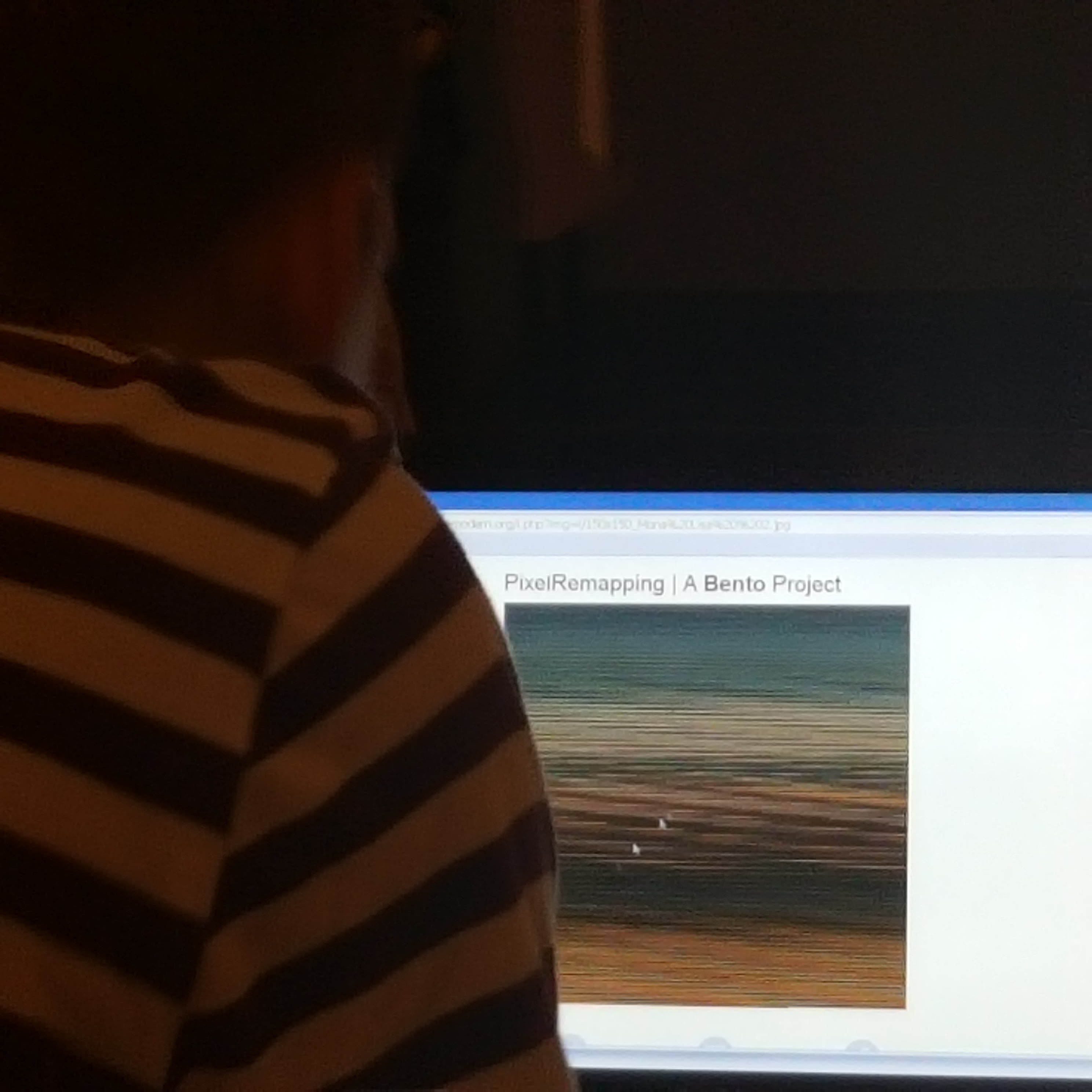 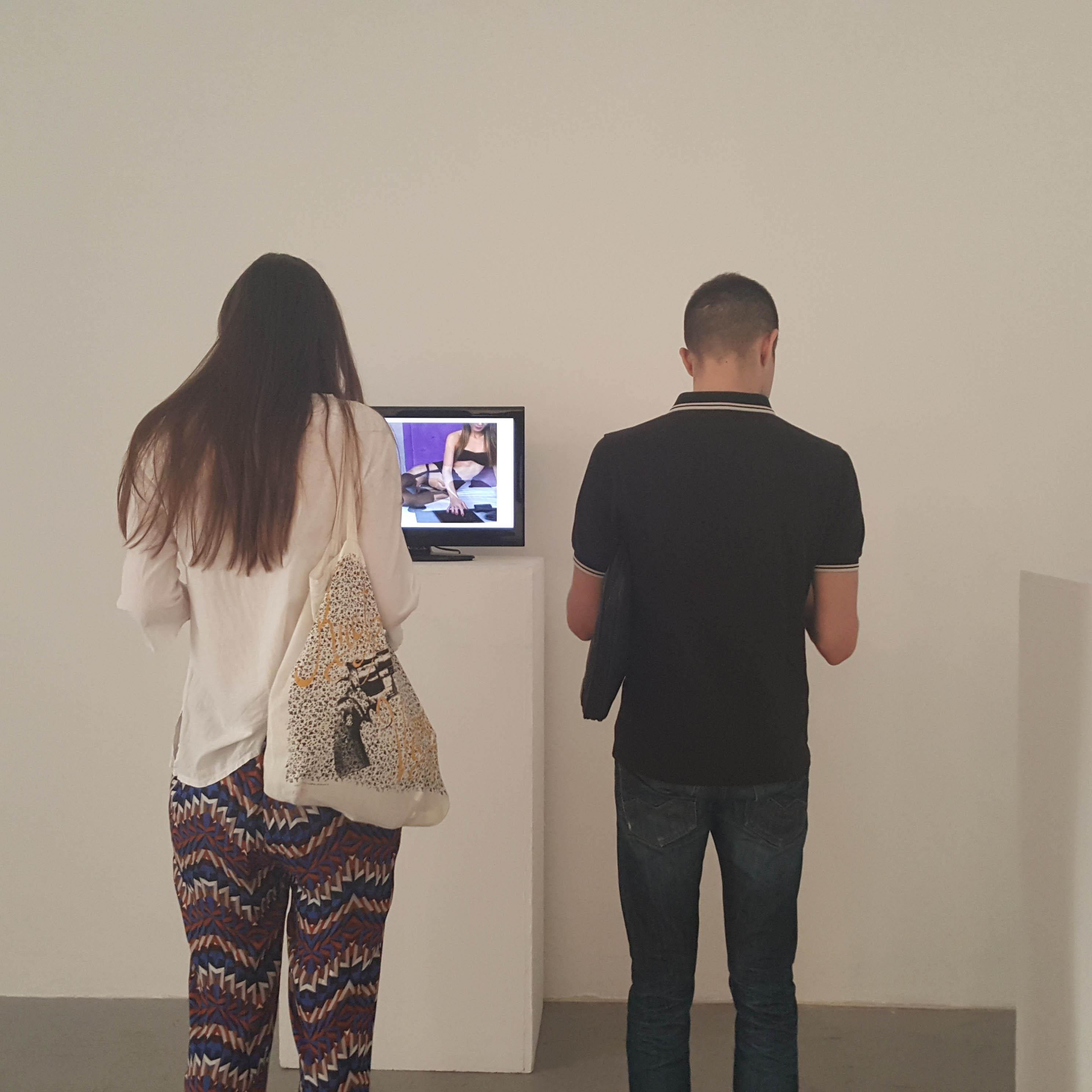 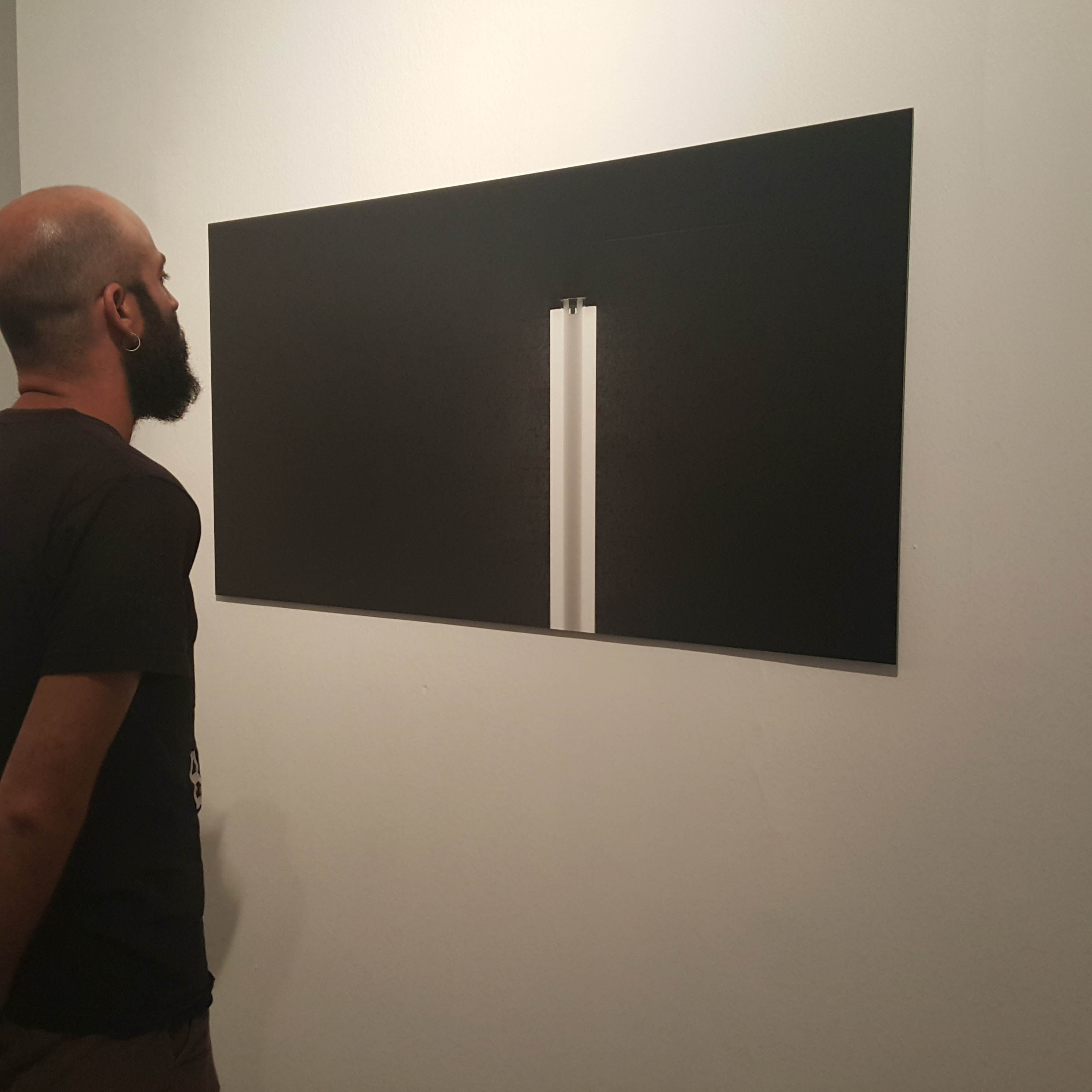 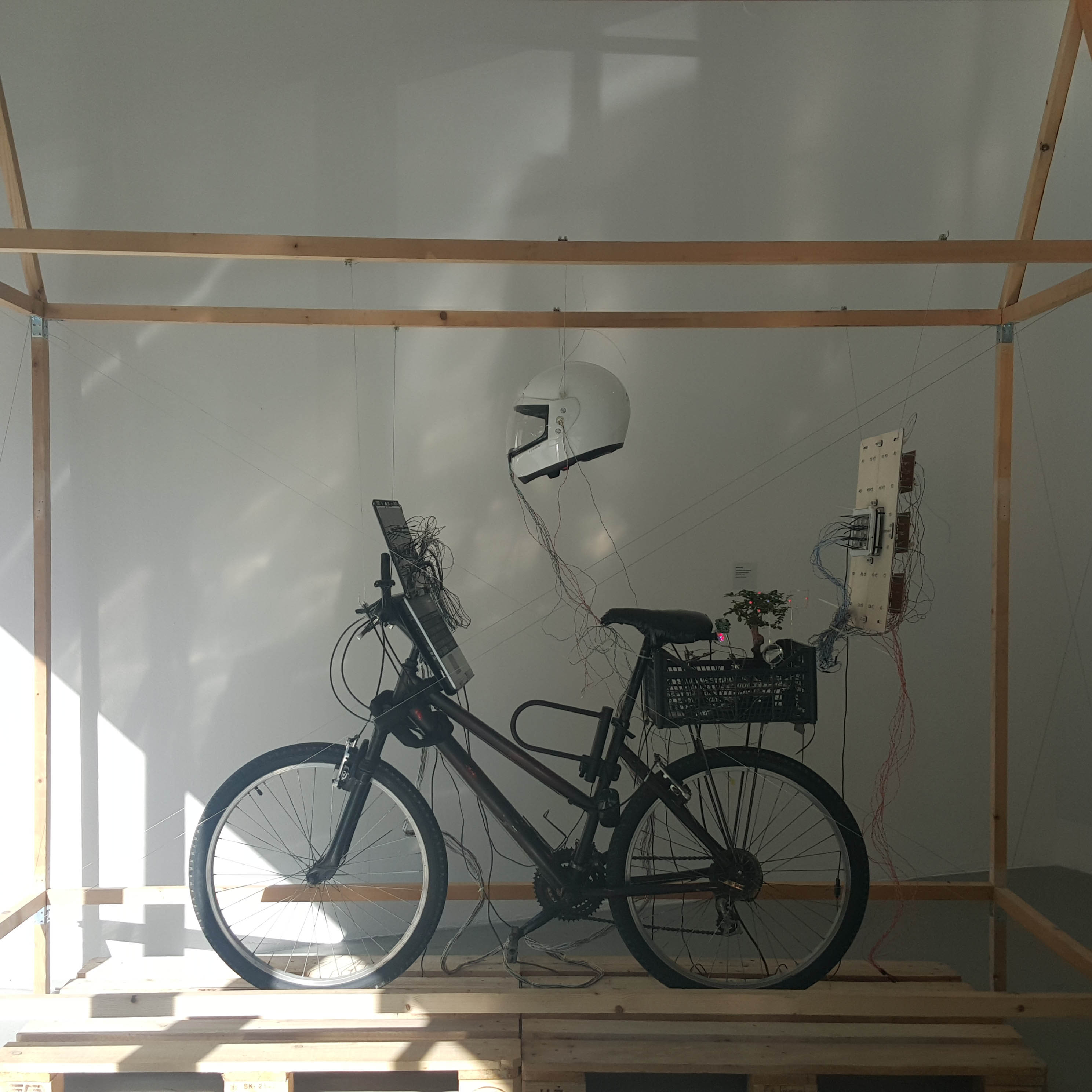 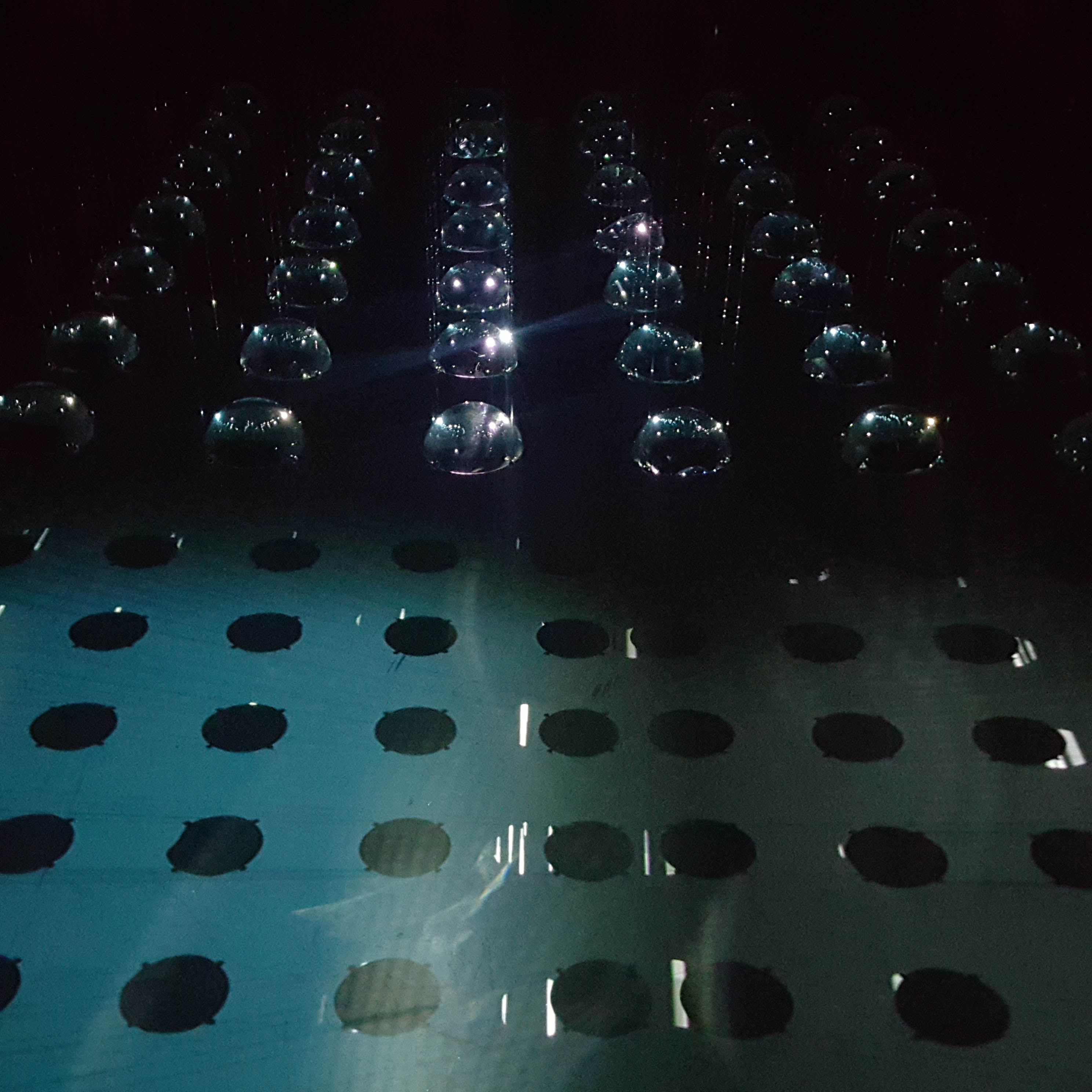 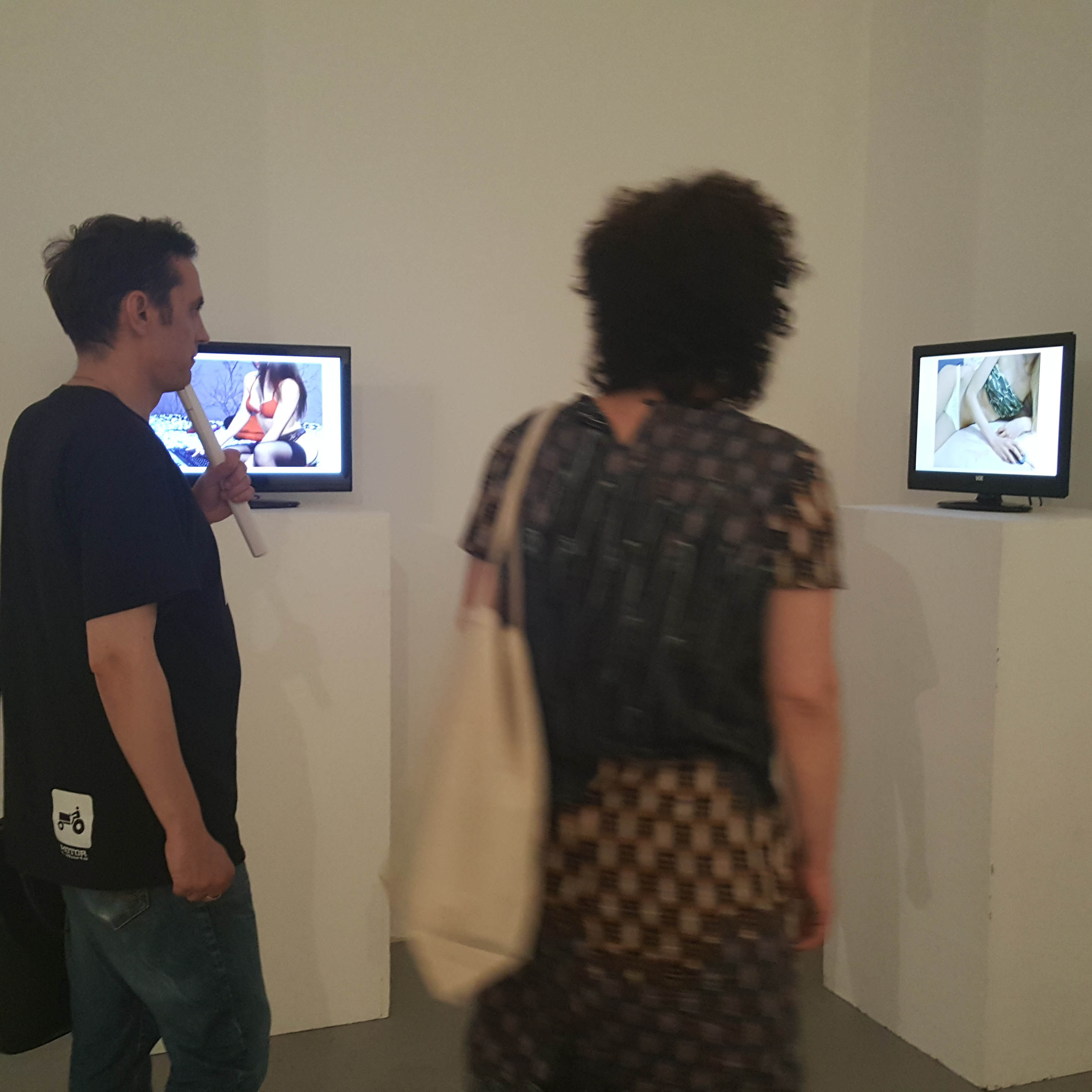 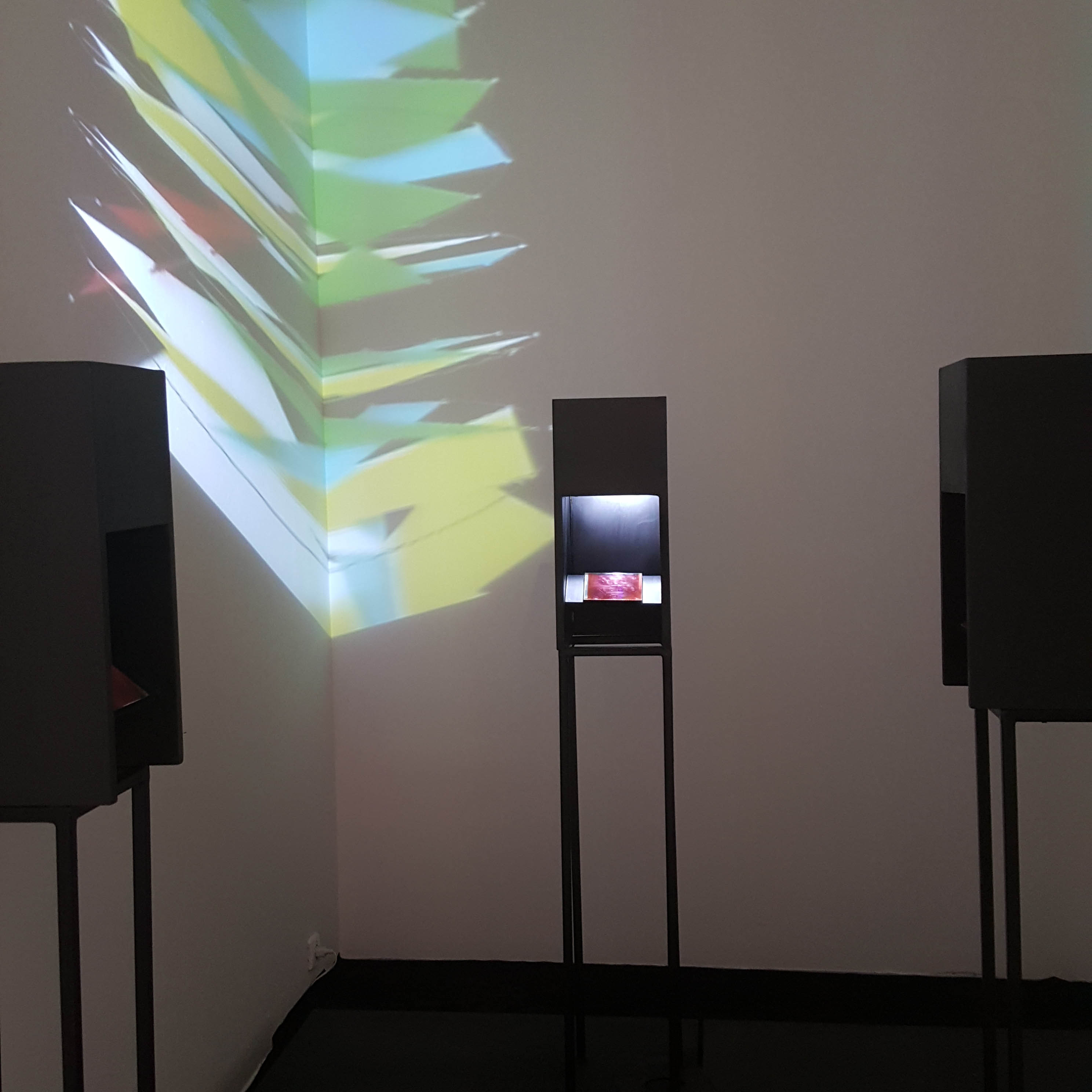 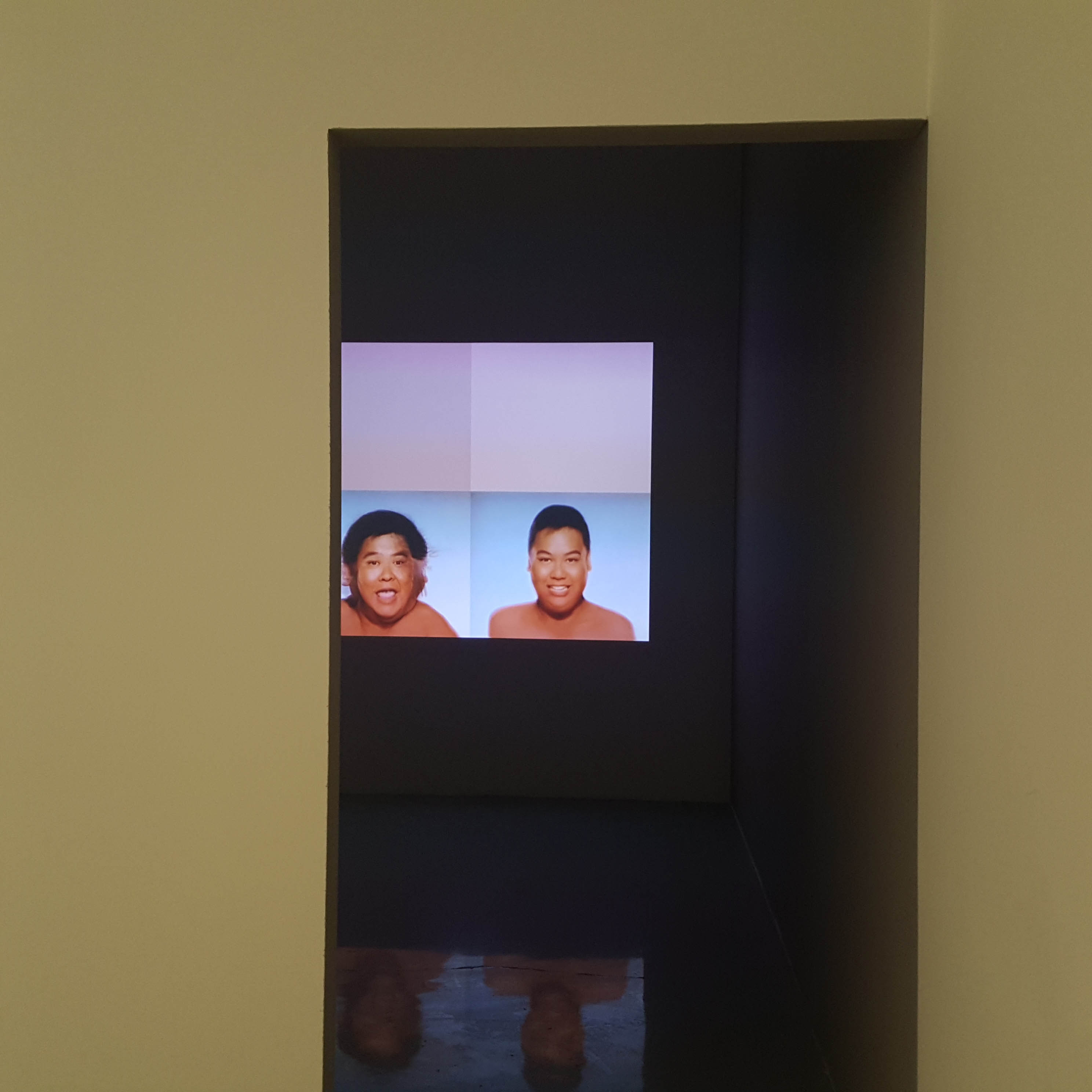 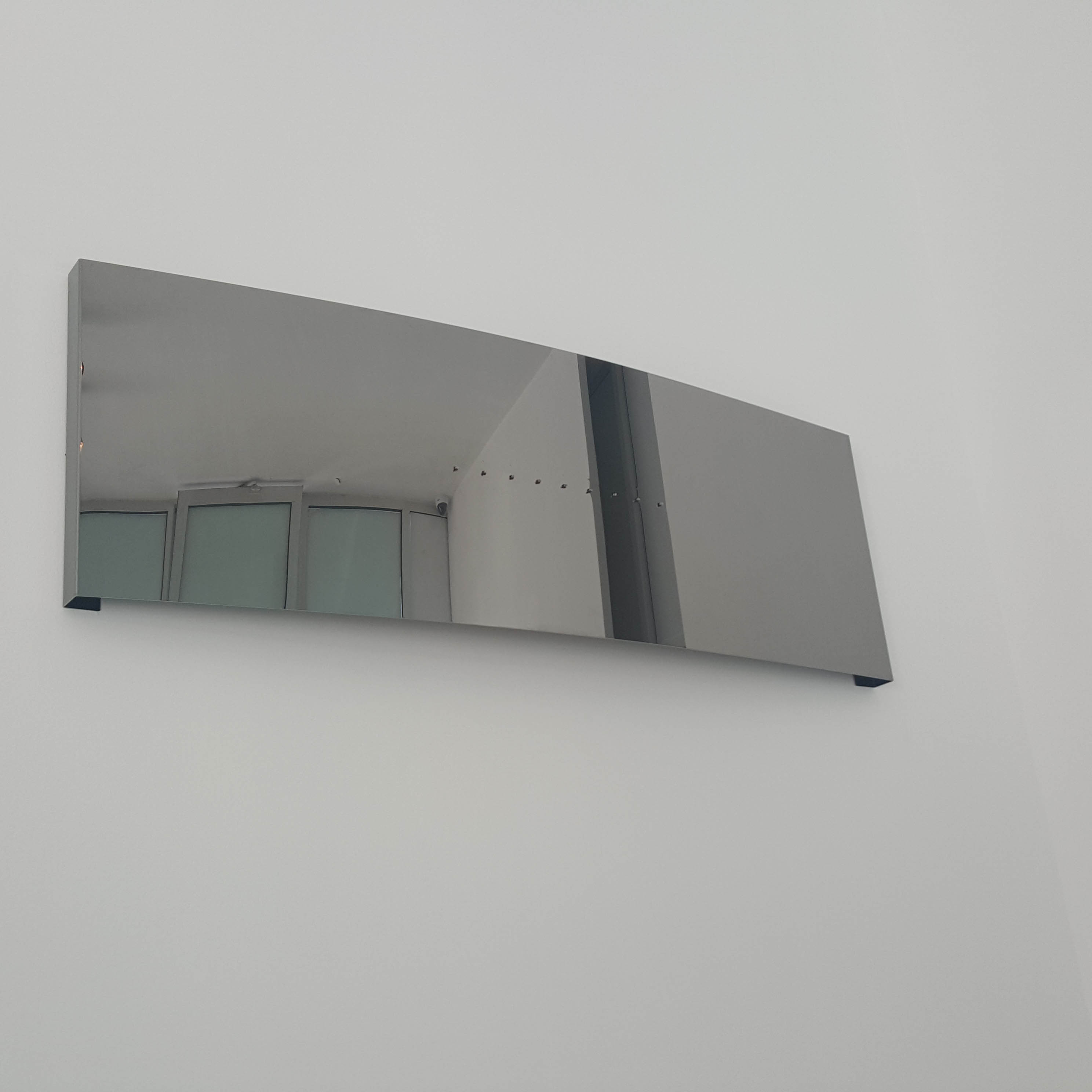 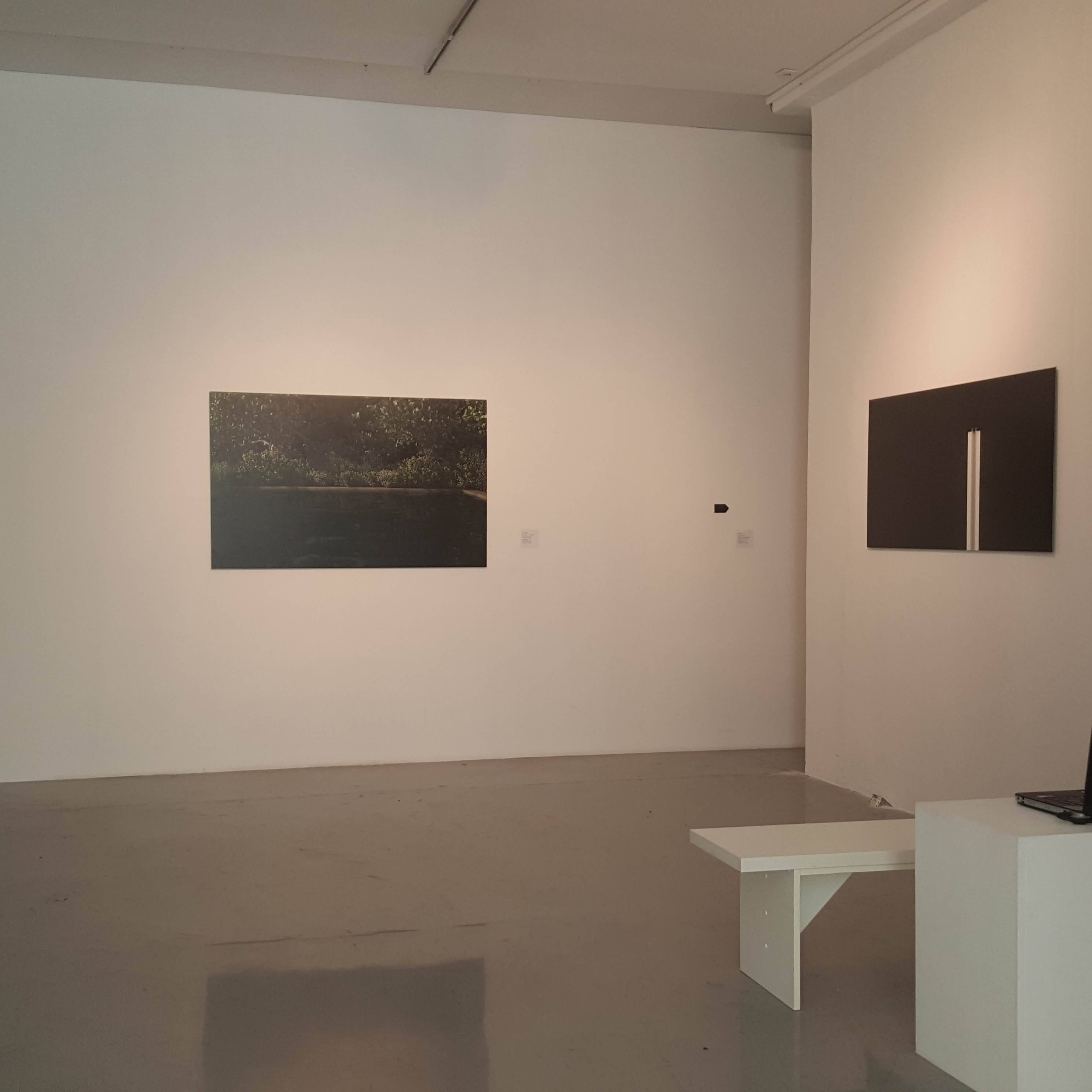 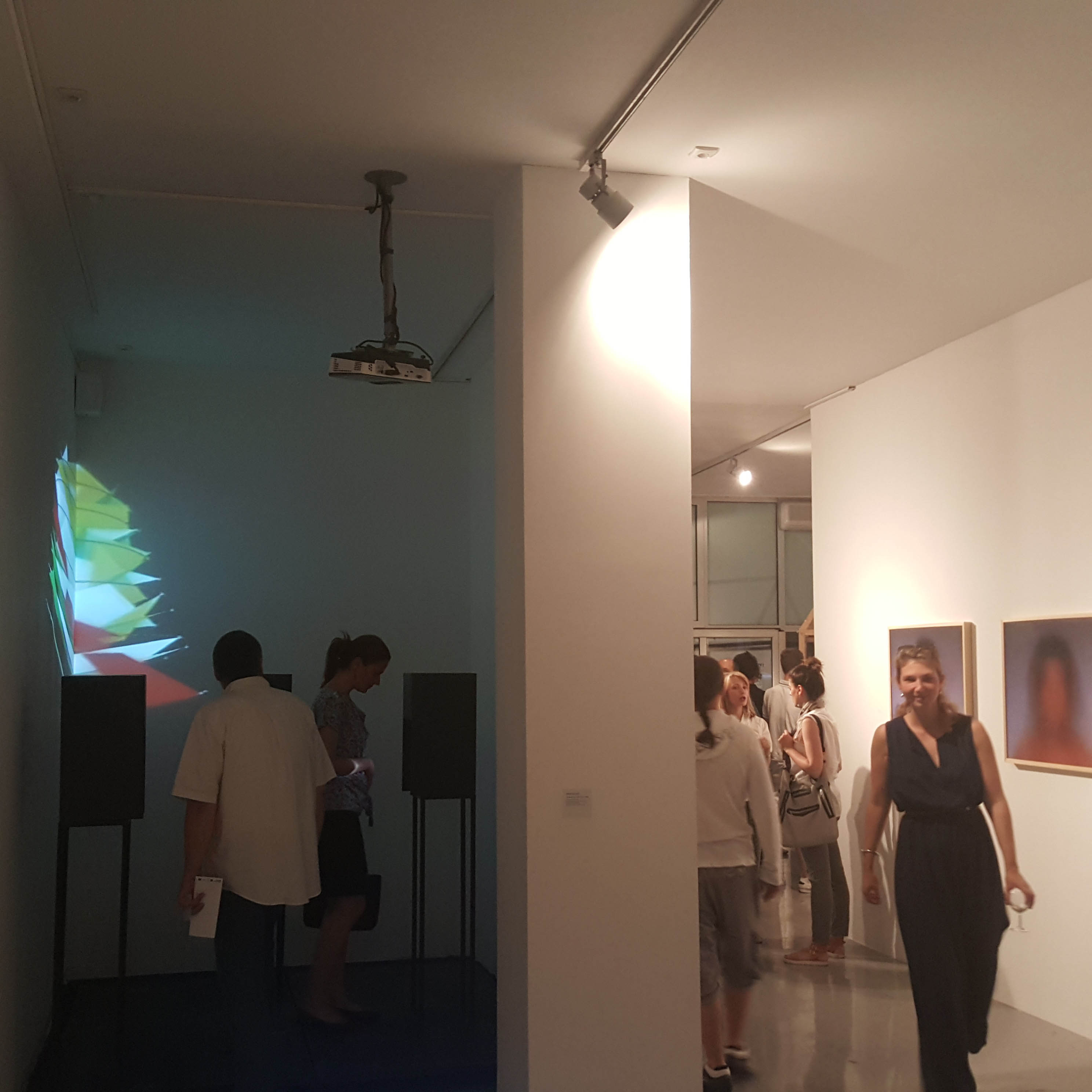