Concept of memory points to a power which consciously preserves life, ways of living and their connection with the past. Manifesting the subjective memory involves both a complex anxiety and an attempt full of promises. For the reason that the acts concerning the memory give away important clues on the definitions of human, subject, identity and history. Discourse of the artist posesses a destructive potential and undermines the immanent identity and consequently the concept of immanent position. Identity is therefore no longer unitary or essential but fluid and diversifying. Fed through multilayered sources and transforms into multilayered forms.

Memory and imagination marked performances of Nezaket Ekici, who carries the mixed traces of the cultures she was born into and she lives with onto her works, challenge the concepts of sexuality, race and identity. While registering the social, political and cultural agenda through her works, Ekici’s performances full of activism and frankness bear a poetic aesthetic as well. The artist reiterates the discourses around the body as an artistic subject, specifically female body through different perspectives and collaborates with the viewer in a different new manner. As she invites the viewers to participate in the exuberance of the performance, she constructs an area for them where reality and life merge with art. Ekici’s performances with the participation of the viewers acquire a sense of actual existence.

For her solo exhibition at Kasa Galeri, Ekici displays performance/installation works in the way that the concepts of time and space collide, match and diffuse into each other. In modernity time spreads into space and gets solidified. New metropolitan spaces are defined according to an idea of fast development into the future; movement takes place in time-space. Whereas in post-modernity space is characterised with nonstop circulation and change; movement is now fast and continuous. Today the effect of speeding the passing by images instead of moving sluggishly in the physical space, is dominant. The artist communicates her own diversity and difference through her ‘body’ which marks the first boundary of the mental and physical space. Ekici physically and psychologically pushes the limits of the body in her powerful and creatively strategic performances which always bear certain risks.

Exhibition ‘Self Diversity’, which will display the remaining installation and documentation of the three performances, planned to take place in three subsequent days in three rooms, somewhat parallel to gallery layout, displays the vigorous energy of Ekici’s productions. Three related performances, while tracing the temporal/spatial and personal alienation, represent an investigation concerning life through art.

At first the artist, who exploits the senses of anxiety and danger caused by the mix of screaming and dreamy aesthetic of fluttering white feathers, seems to point to an epidemic which provoked a social distress at a not so distant past. In the middle of a transparent room, somewhat resembling a laboratory, the artist seems to have taken every necessary precaution with her gloves, mask and protective costume. Transparent room separates the artist and the viewer from each other. Sceaming is heard, the artist tears apart the pillows with an apparent physical effort, screaming gets louder. The artist moves, reminding one of a ritual, as if she dives into a wild deathly struggle. Feathers carry danger as much as beauty, the viewer feels the anxiety in the ecstatic atmosphere. While pointing to the double meaning or meaninglessness of events and lives, the artist also raises the issues of personal and social lack of memory.

‘Daydream’ tackles with the deceitfulness of the imagery where Ekici aims to reveal concepts such as resemblence, identity, self and being by using the mirror effect. In this performance/installation, which she sums up as ‘...sometimes, when you look into a mirror you grasp something. Your reflection activates some questions concerning your existence. Images question the sense of “I”, accept, support and justify. Or do just the opposite...’ Ekici produces poetic atmosphere into which viewers are also invited. The artist, her back turned to the viewer, sits on a white bench in the gallery. The screen facing the viewer and the artist functions as a mirror. On the screen, the body with a romantic backdrop and in the gallery the body turned away from the viewer rhythmically make the same moves. The viewer is trapped in a surreal and dreamlike scene.

Is it possible to see the cities of our times, which become more and more identical, with an outsider’s eye? To what extent Istanbul, with its series of polished touristic forms adjoined to the marketing strategies, is still ‘itself’ or in spite of its costructed image does the city still embrace its own reality? In the performance/installation ‘Zeitgeist’, Ekici aims to expose it with a contrary insight without representing the city’s well known image. Body gets alienated through a technical equipment, and the artist attempts to redefine the city through her own eye. Ekici prior to her gallery performance, runs at the familiar streets of Istanbul with her video camera, registering the witness of people and surroundings. In the gallery space, right next to these pre-recorded images of the street, Ekici’s facial expression at the moment of recording is projected. However, this expression is at present; time representing the performance taking place at the gallery reflects on the physical space. 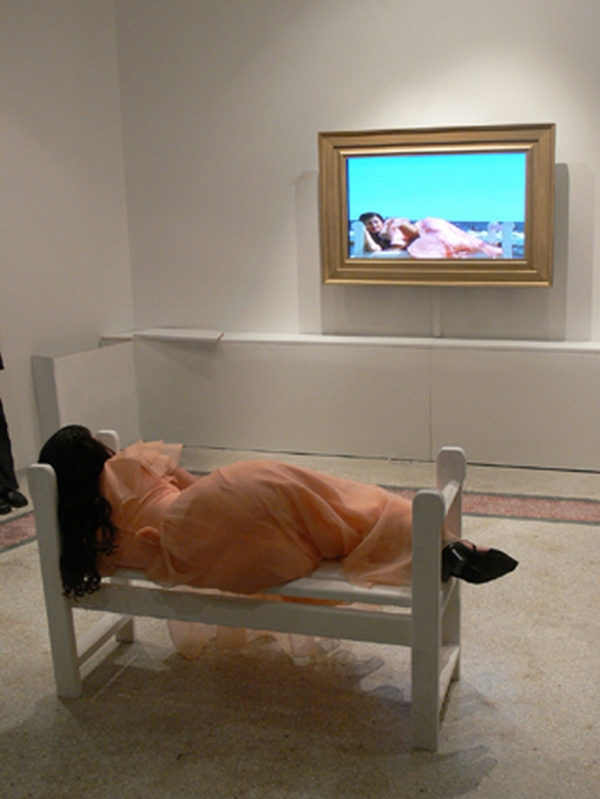 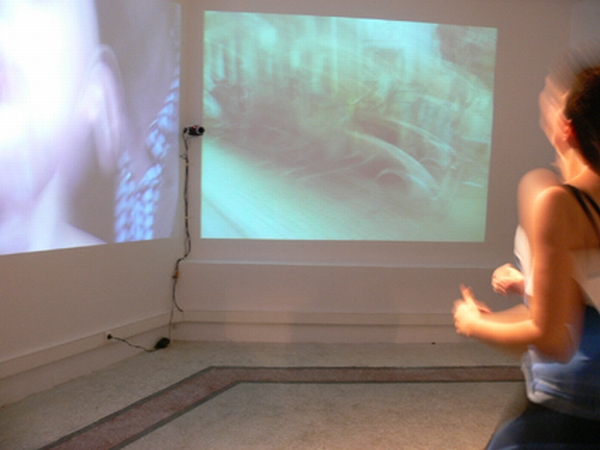 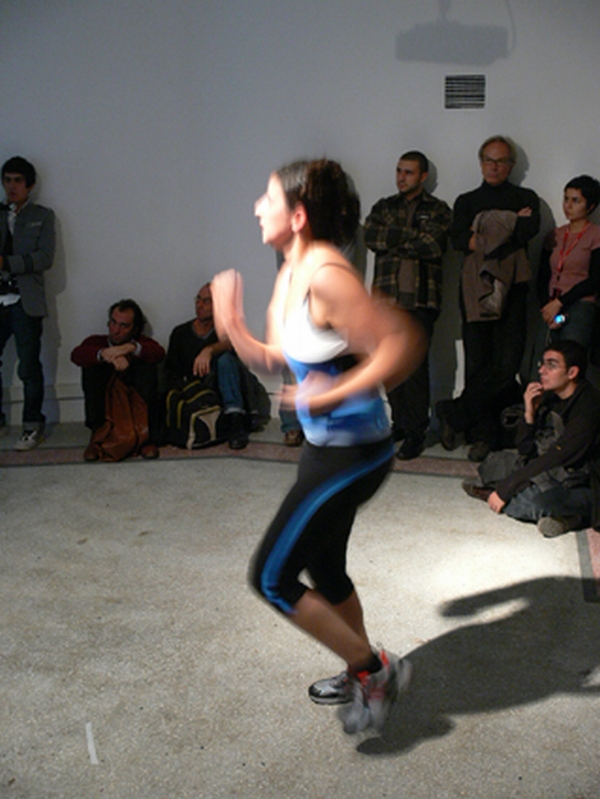 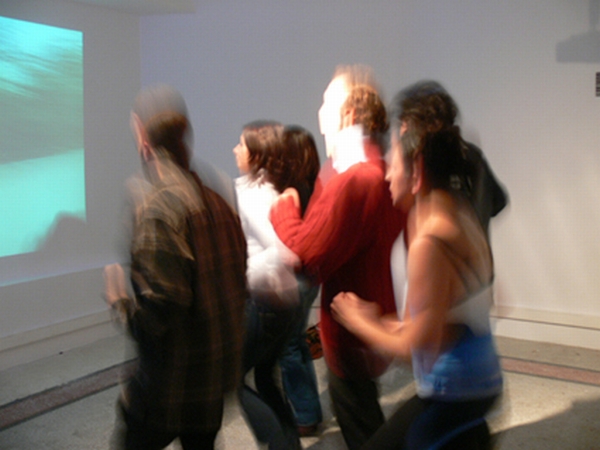 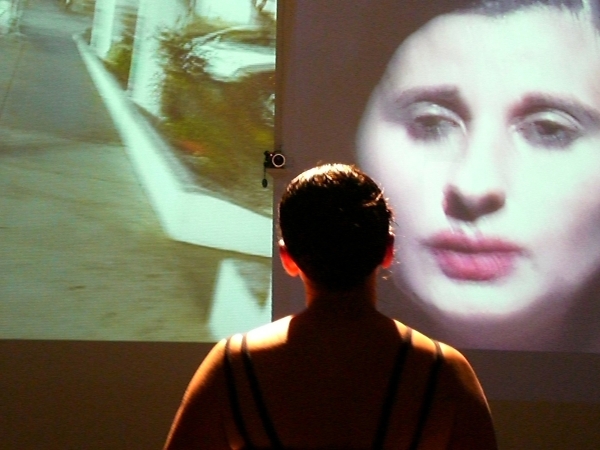 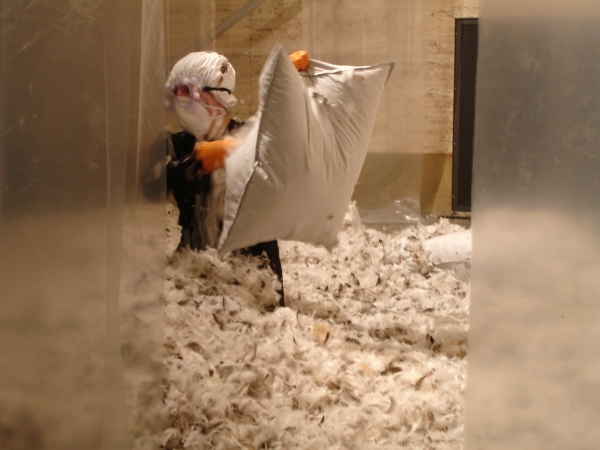 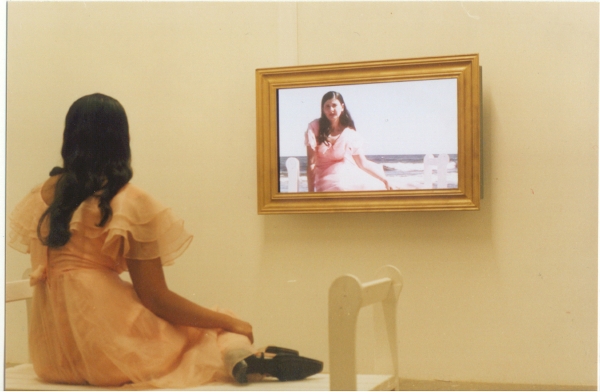 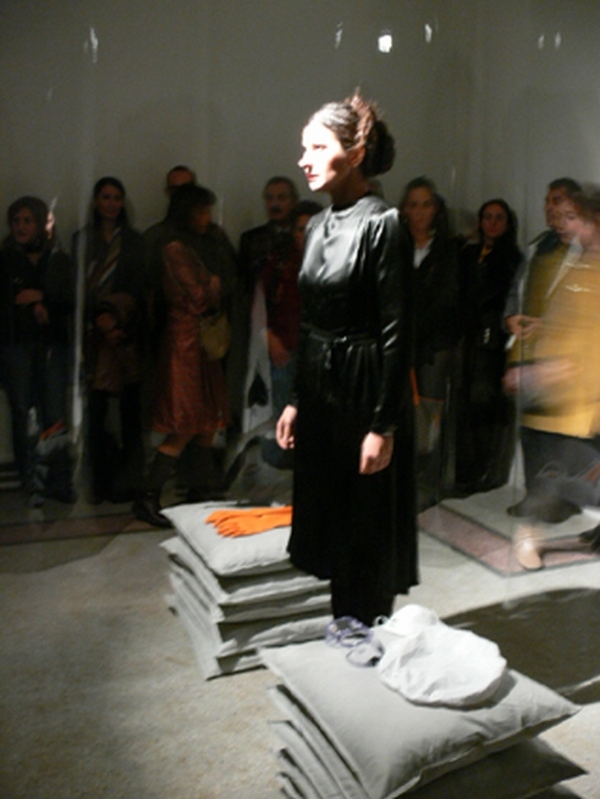